Gemayel to Run for Presidential Post in Second Round 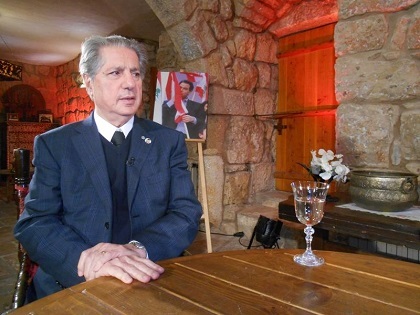 Labor Minister Sejaan Qazzi announced on Wednesday that Kataeb Party chief Amin Gemayel is a candidate for the second parliamentary session set to elect a new president, stressing that the March 14 alliance will cast votes to Lebanese Forces leader Samir Geagea in the first round.

“Gemayel has been a candidate for months... Discussions are focusing on how to secure his victory... The upcoming stage will determine when he enters the presidential race,” Qazzi said.

Minister Qazzi, who is also the deputy chief of the Kataeb party, said in remarks to Voice of Lebanon radio (100.5) that in the light of Wednesday's parliamentary session the March 14 coalition will hold a meeting to set its strategy for the upcoming stage.

However, the official said that “voting for Geagea in the first round is to stress the unity of the March 14 alliance.”

On Tuesday, March 14 leaders convened at the Center House and declared Geagea as their candidate for presidency.

As Safir newspaper reported on Wednesday that Gemayel is the “obvious candidate for the second parliamentary session after Geagea fails to earn the required votes in the first round.”

The daily said that Gemayel and head of al-Mustaqbal movement Saad Hariri realize that Geagea has no chance to win the presidential vote.

As Safir said that Geagea's allies who will vote for him on Wednesday “are those who want to burn him.”

Wednesday's first round of parliamentary deliberations to vote for a new president is expected to fail to elect a new president amid disputes over the name of the new head of state, which threatens a vacuum at the helm of the country's most important Christian post.

The daily's report continues that Free Patriotic Movement chief Michel Aoun, who previously said that he wouldn't announce his candidacy if the rivals didn't reach a deal on him, will kick off “serious” discussions with al-Mustaqbal movement after the first round of voting.

The February 14 Saudi-Wahabi coalition can't seem to make up its mind lol.

Hello -karim--, has the Iranian/Assad coalition decided on a Presidential candidate or are they sticking to the blank vote candidate... I guess it does not matter since the Axis of Resistance controls the Glorious Terrorist militia and their armed thuggery over Lebanon.

You meant to say the March 8 mouthpiece can't make up its mind.

Screw them both they have ruined the country. Time for a change

This says it all,in the second round is where they may all agree on a candidate.
Hope so because no one knows what's going on behind the scene.

Joshep, parliment elects the president, not the public. Although direct election by the public would be much better democratically, this is the system. Therefore public statements of programs are nice but really are useless. It's a power game for mps and political blocks. As such most Lebanese presidents are elected at the last minute through back room deals after the first round where 2/3rds of the vote is needed instead of half +1 from round 2 onwards.

My guess is Aoun or general khawagie, if jumblatt refuses to vote for Aoun.

I think Amin is way less polarizing than samir and aoun but as a Lebanese citizen, I happen to think that in This day and age, keeping a sectarian system in place to only allow a maronite to be a prez just shows you how retarded and our society is at all levels.

HA and its fpm lackeys applying the old syro-farsi tactic :
'our rule or we block/burn the country'.

But this is only possible because of greedy treatrous christians like Aoun and Frangieh...

Living abroad coz of traitors like u.
I also dont want my kids to go in same school as yours.
That might be contagious...

Geagea knew that there is no way he will get the 2/3 of votes,,so my take on this is that he has a plan, and his plan is on track still to elect a M14 candidate.meanwhile his campaign is the first of its kind in Lebanon and that is true democracy,,, shame all others don't follow suit. i think now he will stand down and support Gemayel as a candidate for the next round,and all that is part of a plan.

Micheal Young from the daily star and hariri's mate wrote back in 2009 that 2013 presidential elections has always been geagea's goal since being released.

I was watching lbc during the vote and they had a split screen with geagea on one side. You could see his face change every time a blank vote was read out and especially when they read out Karami and then dani chamoun. By the end he was no longer smiling and the people around him were very disappointed. Why would he have a camera on him during the count? He thought that if he could get close to 50% of the vote then round 2 he would win.

No matter how they spin it, this article explains it perfectly. "After the 1st round they will name a serious candidate". Which one, a candidate that has 5 MPs? It's Aoun and his 20MPs or general khawagie

Let your son run instead of you, old man, you have nothing to offer.

I don't quite know, but I reckon it should be taken as a sign of some sort.

Gaga as Sethrida's First Lady, as close as he could get to the presidency. Good call FT.
\^/..

I've never seen people as stupid as all those commenting on nagar net stories. All of them.

I am really enjoying the themedesign of your blog. Do you ever run into any browser compatibility problems? A handful of my blog readers have complained about my website not operating correctly in Explorer but looks great in Chrome. Do you have any advice to help fix this issue? ecdeefkafeae