14 Million Captagon Pills Seized in Sudan after Tip from Beirut 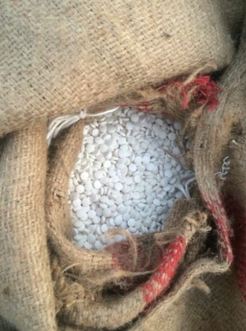 Sudanese police has managed to seize 14 million Captagon narcotic pills that were smuggled from Beirut, following a tip-off from Lebanon's Central Anti-Drug Bureau.

According to a statement issued by the Internal Security Forces, the aforementioned bureau had obtained “confirmed intel about the smuggling of five containers carrying corn and Captagon from the Port of Beirut to Sudan.”

Consequently, the bureau passed on the information to Sudan's anti-narcotics authority, which managed to confiscate the containers upon their arrival at Khartoum's port, the ISF added.

“A quantity of 14 million Captagon pills were found inside and three members of the smuggling gang were arrested,” the ISF said.

The statement mentioned that the operation comes on the heels of seizing five million Captagon pills in Dubai following similar cooperation with its police department.

Two weeks ago, around 15 million Captagon pills were seized at Beirut's port before being trafficked to Dubai.

they're not competing, they send them to africa and from there to Gulf, because GCC customs doublecheck anything from Lebanon and Iran.
They know the jihad al mukhadirat that Khamenei and NasrIran launched on khaliji youth... May ayatodollars' kids all become junkies...

You sound an expert there fetre! How did you manage to give such route details? I can only laugh at you lol

did i hurt u dodge ? are u part of khamenei's legal team ?

U shouldn't be hurt, me attacking khamenei doesnt mean i attack u and other shias but just dirty khomeynists.
The same way if u attack isis or OBL, i won't feel hurt as a sunni, au contraire...