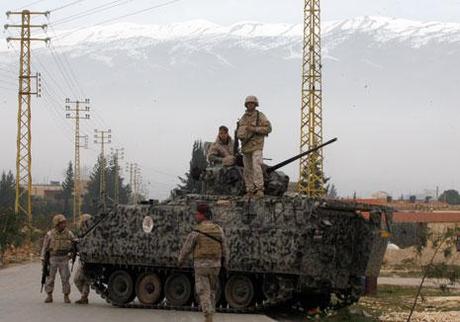 Armed clashes broke out on Wednesday between the Lebanese army and gunmen in the eastern Bekaa region of Arsal, announced the military in a statement.

It said that eight soldiers were wounded in an ambush in al-Rahwa region on the outskirts of Arsal.

The army has since responded to the sources of fire while Voice of Lebanon radio (93.3) said that Syrian jets shelled the Ras Wadi Daher area where the gunmen were deployed.

The Free Sunnis of Baalbek Brigades claimed responsibility for the ambush.

The National News Agency meanwhile had said that the gunmen were Syrian.

LBCI television earlier reported that two of the gunmen were wounded, adding that they have since been arrested.

It revealed that the ambush was set up when the army was raiding a warehouse in al-Rahwa.

Separately, three rockets fired from Arsal's outskirts landed on al-Nabi Othman's plain and al-Labweh in northern Bekaa in the evening, according to LBCI TV.

The army on Monday arrested a Syrian rebel commander in the border town of Arsal, which is witnessing along with other Bekaa towns an unprecedented security plan.

On the same day, three Syrians were arrested at a house in Arsal and one of them was carrying a suicide vest containing 3.5 kilos of explosives.

cedre, is being sad everytime his brother salafis gets targeted. Where is all the Americans to condemn this act? All they say is LAF and Resistance are enemies all the time, but all facts on the ground proofs, that they are indeed fighting the same enemy.

The Resistance can take care of themselves geha. But all Lebanese civilian people should be protected, no matter what sect. I still believe Arsal are held hostage by takfiris from Syria, they should be freed immediately.

Cedre... you are sounding like those that defended the PLO against the LAF back in the 70s... Wake up from this sectarian vision. Terrorist are attacking the Lebanese Army in Lebanese territory and you are trying to defend their actions by blaming Hezbollah! This is exactly how the sectarian idiots justified the PLO attacks on the LAF in the 70s by blaming the Kataeb.

This is the problem when we bury our heads in the sand and pretend what happened in the civi war never happened! we need a truth and reconciliation tribunal, similar to that in south africa after aphartied, other wise no one will learn from the mistakes... or we kill every traitor, similar to after the nazi occupation by France (that way, we will have none of our current "leaders").

STL is controlled by FBI & the CIA. They are not a court to be accepted by any Lebanese.

@Mystic : The lebanese people including HEZBOLLAH accepted and voted for the STL. There is no going back.

And your FBI / CIA illusions is just that ... an illusion.

Meanwhile, Hezbollah is funded, armed, trained and controlled by the terrorist Ayatollah of Iran.

And the terrorist government of Bashar el Assad is bombing Lebanon and breaching our sovereignty and Hezbollah is not doing anything about it. The great resistance of glory holes in Lebanon is resisting the truth and nothing more !

you guys are embarrassing yourselves or exposing yourselves... the army is in Dahye and in Arsel..."Army Arrests Five People in Dahieh on Shooting Charges
by Naharnet Newsdesk 2 days ago".

Why attack the LAF for defending their country? In Arsal, foreign extremists are infiltrating into lebanon... What should the LAF do? send in hezballah? they are doing their duty and are being attacked... and you cheer the attackers of the LAF!!! Shame on you both! Anyone that attacks the LAF should surrender themselves or be destroyed! Sunni, shiite, Christian, druze or jew!

Couldn't agree with you more ado. I am sick and tired of people talking rubbish about the LAF. The only institution we have that still has honour. How dare they tarnish the LAF's reputation is beyond me. They don't want an army. That makes sense to them. Bloody shameful

The arm that touches the Lebanese Army deserves to be broken into a thousand pieces.

What banana republic, in peacetime, allows a private militia to roam its territory under the disguise of "resistance"? Resisting to what? In any democratic country, there is one armed forces and one political system that takes "resistance decisions". Elections decide the path to follow. Using militia, controlled and financed by foreign interests, to dictate politics is a suicide for any country. Grow-up and do not repeat everything your leaders purposely tell you; every politician, with NO EXCEPTIONS, will fight his wars to the last of his supporters. Rarely do we see leaders' family die; if it happens, it is random. Please, DO NOT MIX POLITICS AND RELIGION; it is a dangerous mix.