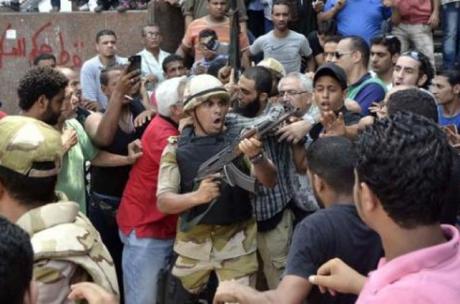 It would be the first mass trial of jihadists in Egypt since the military deposed Islamist president Mohammed Morsi in July last year.

The Sinai-based Ansar Beit al-Maqdis, or the Partisans of Jerusalem, has claimed responsibility for some of the bloodiest attacks against Egypt's security forces since Morsi's overthrow.

The date for the trial has yet to be fixed, but of the 200 accused, 102 are in custody and the rest are on the run, the sources said.

Those who face trial are accused of "belonging to a terrorist group, espionage on behalf of (the Palestinian movement) Hamas, criminal attacks, and terrorism," including deadly bombings targeting police headquarters in Cairo, Mansoura in the Nile Delta and South Sinai.

They are also accused of killing three high-ranking police officials, among them an aide to interior minister Mohamed Ibrahim who himself was targeted by a suicide car bomb in September last year.

The attacks allegedly carried out by the accused, who include some operational leaders, resulted in the deaths of 40 policemen and 14 civilians, the sources said, adding another 348 were wounded.

According to the charges, investigators also found the accused had been in touch with Morsi during his presidency, the sources said.

The military-installed authorities have previously accused Morsi's Muslim Brotherhood of having links to Ansar Beit al-Maqdis.

In a separate development, security officials said an operational leader of the group was arrested on Saturday in Beni Sueif, south of Cairo.

Egypt has been rocked by a wave of militant attacks since Morsi's overthrow, with Ansar Beit al-Maqdis carrying out bombings and shootings in the Sinai Peninsula, Cairo and the Nile Delta.

The group had also claimed the killing of five soldiers when it shot down a military helicopter in the restive Sinai on January 25, a day before the third anniversary of the revolt against long-time autocrat Hosni Mubarak.

Ansar Beit al-Maqdis has been declared as a "terrorist group" by Egypt, the United States and Britain.

The group is thought to have been founded primarily by Egyptians in 2011 after the anti-Mubarak revolt, with most of its fighters drawn from Sinai tribes.

In recent months, the group has also seen support coming from the Nile Delta and some areas of Cairo, experts say.

It is also believed to be led or backed by militants who broke out of prison in 2011 during the anti-Mubarak revolt.

Morsi's overthrow has deeply polarized Egypt, with Amnesty International saying that 1,400 people have been killed in political violence unleashed since his ouster.

Ansar Beit al-Maqdis has vowed more attacks in the coming days as Egypt holds a presidential election on May 26-27, which former army chief Abdel Fattah al-Sisi is expected to win easily.

"We will not rest until we avenge the blood and bodies of Muslims," it said in a statement this month, referring to the killing of Morsi supporters in an ongoing police crackdown.

Sisi ousted Morsi after millions took to the streets in opposition to the Islamist after a single year of turbulent rule.