Saudi Arabia to Lift Travel Ban to Lebanon End of May 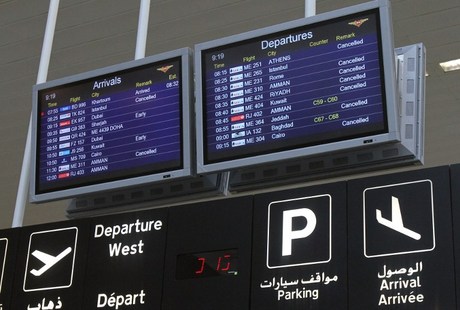 Saudi Arabia is likely to lift a ban that urged Saudi nationals to refrain from traveling to Lebanon due to the critical security situation in the country, LBCI reported on Tuesday.

"Saudi Arabia is inclined to lift the travel ban to Lebanon at the end of May,” LBCI said.

This comes after Saudi Ambassador to Lebanon Ali Awad Assiri returned to the country with his family on May 2 to resume his diplomatic duties.

Assiri had left Lebanon in September 2014 because “of the deteriorating security conditions,” as he stated at the time.

Back then, Prime Minister Tammam Salam's cabinet was not formed yet, and the implementation of the adopted security plan had not kicked off.

The Saudi diplomat stated upon his arrival in Beirut that there is no ban on visits by Saudi nationals to Lebanon.

"King Abdullah is keen on (the safety of) Saudi citizens, and the travel warning was only issued when (certain security) conditions prevailed in the country,” he explained.

The Kingdom had repeatedly called on its citizens to refrain from traveling to Lebanon since the eruption of the Syrian war, as a response to the recurrence of deadly bombings and kidnapping incidents in the country.

The latest warning was issued in September 2013 when it cited “the region's current conditions” as a reason for the travel ban.

cedre, what kind of talk is that? I always defended you against naysayers accusing you to be palestinian.

True Hezbos are here, but it is not a reason to not love our country!

lebfirst, it is just sarcasm and irony against those insulting khalijis here days and nights...
Of course its good news for our tourism industry, we ll even get tourists supposed to go to syria...

This is the best news. Saudi Arabia have given a lot to lebanon. I will never forget the 1 Billion KSA put in 2006 to support our economy when HA was playing boom boom against israel. Saudi under king Abdallah is a force for the good.

So Hariri can come back now?

I meant Hariri, being a Saudi citizen, is now allowed to travel to Lebanon.

hariri is more lebanese than u karimo...

To all of you expats who keep complaining about Lebanon, Check out this link:

Lebanon voted on the top 9 places to visit before you die.

I'm not sure why people voted you down LF. That's cool some people still think our country is worth visiting. I wish it were true however. We have managed to destroy everything beautiful about it and we continue to do so...

not really, i know that insects like u survive thanks to khaliji money...

and i hear a noise going off... it's the department of homeland security terror meter, the lebanese one.

Roar & Southern : There is no place in Lebanon for racist idiots like yourselves. You want to scan stuff ? Start by scanning Hezbollah import / export at the port and the airport.

Lebanon needs to move on from stone age racist idiots such as yourself. You don't want to evolve ? The die ! Kill yourselves but leave us the f alone !

go and tell ur fpm MPs and ministers, all talk no action like usual.
What about the 100s of 1000s of lebanese in Gulf coming back to lebanon for summer or ramadan ? Block them as well ?

You may want KSA to do you a favor and keep the travel ban in place. It has kept MERS in Lebanon to just one case.

dcnzogh, what u said makes sense, but what about our expats living there ?

Dear brother,
We will pray for them and God willing they are sufficiently informed to take as many precautions as they can to protect themselves.

There have been three cases of MERS reported in the U.S. one in the state of Indiana (the patient was a KSA healthcare worker who came to the U.S.) and two more identified in the state of Florida who were exposed to someone visiting Orlando from KSA.

It looks like our Summer Tourist Season is building up nicely, so far that is. But memories of 2006 remain fresh and painful, because everyone was gearing up for what would have possibly been one of the very best seasons ever for Lebanon, till alas our dear Hezbollah decided to remind us that it is the Lebanese State, and NOT the Lebanese State is the Lebanese State. What happened thereafter needs no more explanation but remind of the string of miseries that ensued thereafter. It seems now that in Lebanon prosperity for its people has become illegal.

Yes, generous in promoting and exporting their terrorism to Lebanon.