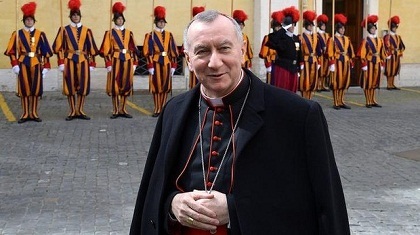 The Vatican's Secretary of State on Thursday defended the Palestinians' right to a "sovereign and independent" homeland and said he hoped Pope Francis's upcoming visit would lead to "courageous decisions" for peace.

"We know that the pope is going to a particularly suffering land," Cardinal Pietro Parolin, whose role is equivalent to that of a prime minister, told Vatican television ahead of the pope's three-day visit starting on Saturday.

"I really hope that the fruit will be to help politicians and all people of good will take courageous decisions on the path to peace," Parolin said in the interview, which was posted on the website of Vatican Radio.

Asked about particular points that Francis will talk about during the visit amid stalled peace talks, Parolin said they would be in line with Vatican policy.

"On the one hand, Israel's right to exist in peace and security within internationally recognized boundaries.

"And the Palestinian people's right to have a homeland, sovereign and independent, the right to move around freely, the right to live in dignity," he said.

The pope travels to Jordan first on Saturday where he will meet Syrian refugees, then to Bethlehem in the Palestinian Territories on Sunday and on to Jerusalem where he will hold a prayer for Christian unity and visit holy sites.

The Vatican's decision for Francis to fly by helicopter directly to Bethlehem from Jordan without passing through Israel as normally required by diplomatic protocol is a first that has cheered Palestinians and angered Israelis.

The Vatican recognized the Palestinian Territories as the "State of Palestine" in 2012 and has incurred Israeli ire in the past for appearing to side with the Palestinians although relations have improved markedly in recent years.

Clearly officials in Israel are taken aback by these anti-Semitic remarks from a high Vatican official. Prime Minister Netanyahu told his US counterpart, Mrs. Emelda Hershberg of Lincoln Park, Chicago, that the Vatican should do about this Palestinian question what it had done with the Jewish question in the 30's and 40's: look the other way (in a phone call monitored by the intelligence service of a small European nation and announced in Rupert Murdoch's flagship periodical, The Daily Bomb). "What's wrong with these people?" Netanyahu asked in the phone call, apparently rhetorically.

And here were they insisting that this will be a patriarchial visit and not deal with politics.