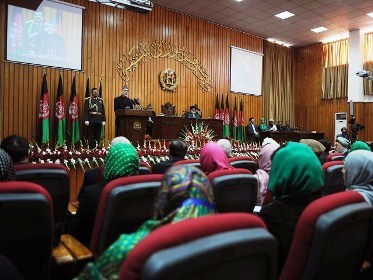 Afghanistan's election commission on Sunday threw nine lawmakers out of parliament in a bid to settle nearly a year of disputes over fraud-tainted elections that have paralyzed the lower house.

Although President Hamid Karzai tasked the Independent Election Commission (IEC) with making a final ruling, it was not immediately clear whether its decision would finally end the row or run the risk of more angry protests.

The issue has prompted large demonstrations on the streets of Kabul in recent weeks, as U.S.-led NATO combat troops start initial withdrawals from the troubled country in a process due to be completed by the end of 2014.

"Nine people... from eight provinces are reinstated and nine people will have to leave their seats," said Fazil Ahmad Manawi, IEC chairman.

The IEC said the replacement lawmakers initially won the seats according to preliminary results in last September's parliamentary elections, but were later stripped of their victories.

"The reasons for their removal were not enough... so the IEC decided to reinstate those nine persons," Manawi said.

The Afghan parliament has been at a virtual stand-still since January, when it was sworn in, because of the dispute over whether candidates should be kicked out over vote fraud, and if so how many.

There has been a string of angry demonstrations on the streets of Kabul by affected politicians and their supporters.

Although Karzai charged the IEC with resolving the row this month, commentators predict the ruling may not be the end of the stand-off.

In a blog posting earlier this week, commentator Martine van Bijlert of the Afghanistan Analysts Network wrote: "This last chapter of the scuffle is likely be messy as the various sides are mobilizing their people and using increasingly heated language.

"The stand-off has harmed the legitimacy of all three powers of government, who now feel justified to consistently contest each other’s authorities."

In June, a Karzai-backed special election tribunal ruled that 62 lawmakers should be expelled, a quarter of the 249-seat lower house of parliament known as the Wolesi Jirga.

But Karzai scrapped the tribunal in a presidential decree this month, handing authority for resolving the issue to the IEC.

Karzai's office expected the IEC to base its findings on previous court rulings, including that of the special tribunal, to which the IEC has long been opposed.

The election used a single non-transferable vote system, a format adopted in few other countries, which can lead to winners being elected with less than one percent of the vote if there are large numbers of candidates.

Under it, each constituency has multiple representatives but each voter only has one vote.