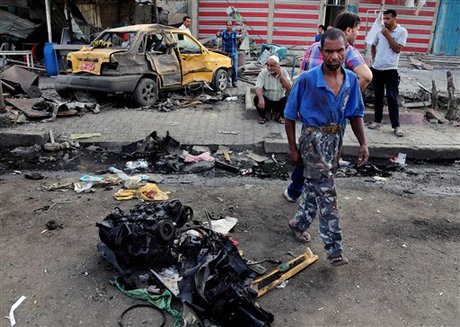 Shelling of conflict-hit Iraqi city Fallujah killed 18 people and wounded another 43 Tuesday, according to Doctor Ahmed Shami at the city hospital.

The shelling, which hit a market, municipal offices and in the vicinity of the hospital itself, struck at around midday, said an AFP journalist in the city, just a short drive west of Baghdad.

Fallujah has been out of government hands for months, with militants holding sway. The army has regularly shelled the city, and attempted multiple ground offensives in a bid to re-take it.

The army insists it is targeting militant hideouts, but residents and human rights groups say civilians are bearing the brunt of the shelling.

The crisis in the desert province of Anbar, which borders Syria and of which Fallujah is a part, began in late December when security forces dismantled a longstanding protest camp maintained by the province's mainly Sunni Arab population to vent grievances against the government.

Militants subsequently seized parts of the provincial capital, Ramadi, and all of Fallujah, the first time anti-government forces have exercised such open control in major cities since the peak of the deadly violence that followed the U.S.-led invasion of 2003.

They have held all of Fallujah since, and protracted battles have continued in Ramadi.