Fierce Clashes between Families in Hermel amid Shooting in Arsal 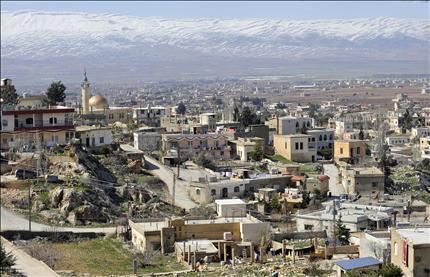 Armed clashes erupted Wednesday between two families in the Bekaa town of Hermel, sparking panic among the residents of the region.

“Clashes with light- and medium-caliber weapons broke out between members of the Allaw and Nassereddine clans over familial disputes,” state-run National News Agency reported.

Separately, NNA said shooting erupted in the northern Bekaa town of Brital during a dispute over a “theft incident” between the families of Mazloum and Tlais. The agency said no casualties were reported.

Meanwhile, a man from the Berro family opened fire at Hassan Dib al-Fleiti in the Arsal area of Wadi al-Hosn, leaving him critically wounded, the agency said.

The developments come amid an unprecedented security plan that the army has been implementing since April in the Bekaa, which has resulted in the arrest of top theft gang chiefs and drug dealers.

Hezbollah seems to be losing a lot of business these days :) Terrorist criminals !

Hezbollah seems to be losing a lot of business these days :) Terrorist criminals !

Hello Liberty
How are you?
I agree with you indeed stone age mentality indeed
Pity the nation