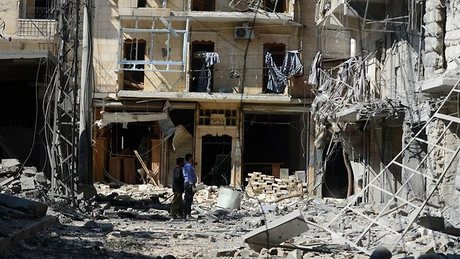 Fighting is raging in eastern Syria as a jihadist group rooted in neighboring Iraq pushes a fresh bid to create an "Islamic state" along the border, a monitor said Tuesday.

Since the Islamic State of Iraq and the Levant (ISIL) launched a new offensive in Deir Ezzor province 40 days ago, 634 people, mainly fighters, have been killed, the Syrian Observatory for Human Rights said.

At the same time, 130,000 people have been forced to leave their homes, with 39 civilians killed from shelling in the fighting.

The Britain-based Observatory said 354 of the dead were members of Al-Nusra Front -- Syria's official al-Qaida arm -- and allied rebel groups.

The group was once welcomed by some Syrian rebels, but earned the rebellion's wrath because of its systematic abuses and quest for hegemony.

Even Al-Nusra turned against ISIL, after its Iraqi chief, Abu Bakr al-Baghdadi, sought to take over the group.

Fighting by rebel groups and Al-Nusra against ISIL has killed more than 6,000 people since it began in early January, according to the Observatory.

Syria's war has killed more than 162,000 people and forced nearly half the population to flee their homes.

Clean the country from the Jihadists. Self-cleaning is the most efficient approch. Goog job!