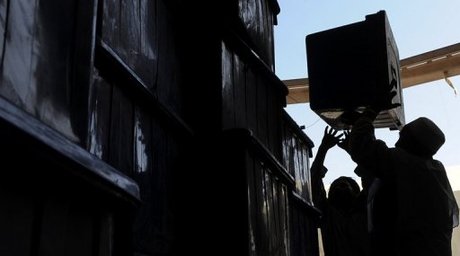 Up to 700 Afghans marched through Kabul on Tuesday to protest against a decision by the country's election commission to throw nine lawmakers out of parliament in a dispute over vote fraud.

The protestors condemned the United Nations, accusing its mission in Afghanistan, UNAMA, of interference, an Agence France Presse reporter said.

"Death to UNAMA which supported this evil process," and "Death to those who oppose democracy," the crowd shouted as they marched towards the presidential palace and the main U.N. compound.

"The real work must now begin," it added; calling on Afghan politicians and officials to work for "peace, progress and prosperity" in their country.

The IEC was handed authority by President Hamid Karzai to make the final ruling in the nearly year-long row over ballot stuffing.

But the issue is highly controversial in Afghanistan and has prompted a string of angry protests on the streets of Kabul by supporters of rival politicians in recent months.

In June, a special election tribunal backed by Karzai ruled that 62 lawmakers, a quarter of lower house of parliament, should be expelled.

However, the IEC's final ruling fell well short of that figure.