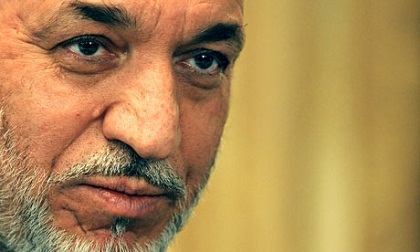 Afghan voters on Saturday offered contrasting opinions of President Hamid Karzai's 13-year rule, which began with the heady optimism of 2001 when the Taliban were ousted and will end after the current election.

Casting ballots to choose his successor, voters looked back at his turbulent time in office and passed judgment on his successes and failures as Afghanistan faces a resilient insurgency and a growing economic crisis.

The 1996-2001 Taliban regime imposed a strict version of Sharia law, stoning women to death for "moral" crimes, chopping off thieves' hands and banning girls from attending school, as well as outlawing television, music and cinemas.

But the period since the Islamists were toppled in a U.S.-led offensive has seen rapid development offset by war, corruption and continuing poverty despite billions of dollars of aid.

"Our children started to go to school during Karzai's government," Gul Shira, 35-year old housewife, told AFP in the southern city of Kandahar, near where Karzai was born.

"Our life has changed. I am here to vote today -- I could not do that under the Taliban.

"If Karzai was allowed to nominate himself as a candidate again, I would vote for him."

Abdul Rahim, 33, a university student in Kandahar, also said Afghanistan had made big strides under Karzai, describing the post-Taliban era as "golden years".

"We hope the people choose someone who can complete the mission he has started," he said.

But at the same polling station, others voiced anger over the errors, greed and missed opportunities during a decade of massive international support.

"I didn't vote in the first round, because I believed Karzai would interfere and our votes would have no value," said Samiullah, 30, a shopkeeper.

"I'm voting today because I want to neutralize Karzai's efforts to commit fraud. He is the one who has taken the country to the brink of collapse."

In the eastern city of Jalalabad, Najiba, wearing an all-encompassing burqa, said the election itself was Karzai's legacy.

"Handing over power peacefully to another president is his biggest achievement," she said. "If the next president is bad, then we will miss Karzai."

Asma, 25, who like many Afghans uses only one name, listed the pros and cons of a president who dominated modern Afghanistan at a time when up to 150,000 U.S.-led NATO troops were at war with the Taliban.

"The good thing about him was that Afghanistan started from nothing after the fall of the Taliban," she said. "Much work has been done in education, health and reconstruction.

"But his shortcomings were that he left a corrupt Afghanistan behind him, so today I voted for a candidate to build good governance."

Even after the handover, Afghans may not be saying a final goodbye to Karzai as he is expected to retain an influential role in national politics.