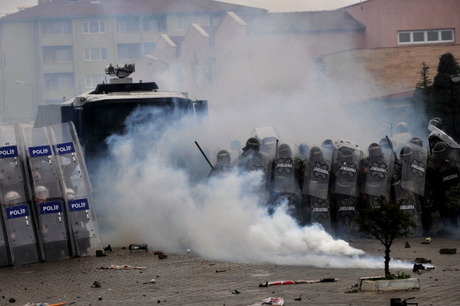 Turkey's top court ruled on Wednesday that the rights of 230 military officers sentenced to long prison terms in 2012 for plotting against the government were violated, local media reported.

The judgement by the Constitutional Court said there were reasons to doubt the evidence and witness statements used in the highly publicized Sledgehammer trial, opening the way for a potential retrial according to government press agency Anatolia.

The full ruling will be released in the coming days.

In September 2012, a tribunal in Silivri near Istanbul handed down sentences of between 13 and 20 years to 326 officers for seeking to overthrow the government of Prime Minister Recep Tayyip Erdogan, who has been in power since 2003.

The officers, including a number of high-ranking retired generals, were accused of plotting to foment unrest with attacks on mosques and sending planes to provoke a conflict with Greece that would provide the pretext for a coup.

Rights groups criticized the trial, questioning the impartiality of the magistrates.

The defense argued that the Sledgehammer plan -- "Balyoz" in Turkish -- was only a theoretical exercise prepared by the army in 2003, and that the trial was an attempt by the government to undermine the military, which has carried out four coups since 1960.

Another group was separately convicted last August of being part of a "deep state" group of conspirators known as Ergenenkon. Among them was the former chief of defense staff, General Ilker Basbug, who was sentenced to life imprisonment.

In December, Erdogan indicated there could be a retrial in the Ergenenkon case. His apparent U-turn came as he was embroiled in a huge corruption scandal involving members of his family and government.

The Constitutional Court has been a persistent thorn in Erdogan's side. It is seen as upholding a constitution that was framed by a former military government, and has overturned or challenged several government decrees in recent years.