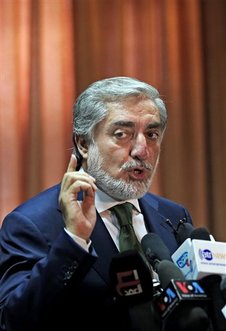 About 100 supporters of Afghan presidential candidate Abdullah Abdullah demonstrated in Kabul on Thursday against alleged election fraud in the first public protest of a growing political crisis.

Abdullah boycotted the vote count on Wednesday, saying he was the victim of "blatant fraud" in the run-off election to chose a successor to President Hamid Karzai in Afghanistan's first democratic transfer of power.

His announcement threw the election into doubt as Afghan officials and international diplomats scrambled to keep the process on track ahead of preliminary results due out on July 2.

The U.N. mission warned that if candidates "abandon the legal process and framework and appeal directly to supporters (it) could incite violence".

In a strong statement late Wednesday, the U.N. described Abdullah's decision to suspend cooperation with the Independent Election Commission (IEC) as "regrettable" and expressed its "utmost concern".

"Some people have already called for civil disobedience and some incidents have already taken place," it said.

At the small demonstration in central Kabul, Abdullah supporters chanted slogans against the IEC and Karzai.

"We're here to support Abdullah Abdullah. We are going to defend our vote because we're proud of it," said Mohmmad Hashim, a 25-year-old student and one of the protest organizers.

"We are going to stay here until Abdullah is president."

But Abdullah's stand against the IEC has ignited a dispute that could trigger instability as U.S.-led foreign combat troops withdraw by the end of the year.