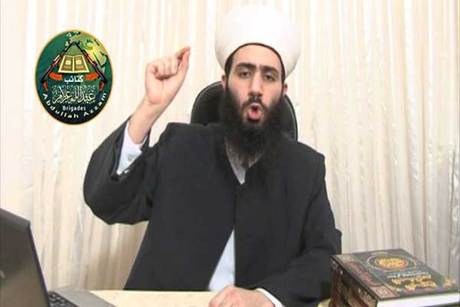 The Qaida-linked Abdullah Azzam Brigades on Tuesday warned Hizbullah that its strongholds in Lebanon will not know safety if the party does not end its military intervention in neighboring Syria.

“The targeting of your agent (General Security chief Abbas) Ibrahim and the (attacks) you witnessed in your Dahieh (region) only confirm that you will not enjoy safety until security returns to the people of Syria and Lebanon,” Sirajeddine Zureiqat, a fugitive Lebanese cleric who has been described as AAB's spokesman, said on his Twitter account.

Zureiqat described his tweets as “comments on the latest incidents in Lebanon.”

His remarks come one day after a suicide car bombing occurred near an army checkpoint and a packed cafe in the Tayyouneh area on the peripheries of Dahieh, a Hizbullah bastion, killing one person and wounding 20 others.

Monday's attack was the second in four days. On Friday, a suicide bomber detonated an explosives-rigged car at a security checkpoint in the Bekaa area of Dahr al-Baydar, killing one person and wounding several others.

Maj. Gen. Ibrahim's convoy was only 200 meters away from the blast, but it is still not clear if he was the target of the attack.

“But we tell the Iranian party: Your battle is not only with us anymore but rather with the Sunni community in Syria and Lebanon,” he added.

Referring to the latest attacks, Zureiqat noted that Sunnis in Syria and Lebanon are seeking to “strike” Hizbullah, which “has brought this upon itself through its adventures in Syria.”

“The latest bombings are clear evidence that your war is not against takfiri organizations as you claim, as the majority of Sunnis have started defending themselves with their own means,” the fugitive cleric added.

Zureiqat had announced Abdullah Azzam Brigades' responsibility for the twin bombing that rocked the Iranian embassy in Beirut on November 19, 2013.

Hizbullah's strongholds in Beirut's southern suburbs and the Bekaa have been recently targeted by around 10 deadly bombings, which were claimed by Sunni extremist groups who blamed the party for sending thousands of fighters into Syria to support President Bashar Assad's regime against rebels seeking to oust him.

No, dude! Just no! I hate Hizb as much as the next guy, but to wish wholesale death and destruction in this manner is just going too far. This sort of extremism is precisely what both sides here are trying to sow, and your words could have just as well come from the mouth of the poster-child for one of their recruitment campaigns. Tayyouneh comprises of both Sunnis and Shia, and both were down on the ground immediately after the explosion to help out the wounded, since a car-bomb doesn't differentiate.

Well said Maxx! We can disagree politically but murder is murder and anyone who supports a terrorist bombing in Lebanon committed by any side is the real traitor!

@ResistanceFailed4x : Murder is murder you say ? Hmmm ... not only is your party made up of known murderers, plotters, assassins, bomb riggers and such. You support the murderer and butcher Bashar ! There is no difference between you and the rat in the article above ! Both terrorists. You should both be eradicated ! And you are as much a traitor as anyone you accuse !

But ur not going to cheer kudos to u...TERRORIST!

'HA declaring war on the Syrian people" LOL! Tell me Jerry how is Saudi this time of year?

And no resemblance with khomaini?....
Go have chupachups folks, really a lot of chupachups...

That is one ugly cannibal terrorist who will soon be smoked out and brought to justice by our brave Lebanese soldiers and resistance.

funny cause not even hezbollah said that KSA killed all the antisyrian lebanese! LOL just you for the sake of your propaganda it seems... LOL

Another. bearded turbaned guy pointing his finger, mouthing some religious reason to engage in mass killing of people who do not recite prayers of worship like he does. If it were not true it would be funny. The arms dealers dream, anther religious fanatic, fanning the flames of war with a sure fired way to incite people to kill, religion! Sex sells and so does religion, move that product boys, stack those bodies, and keep those orders for weapons and ammo coming in

What a waste to have a fine religious based militia, without a second one, equal in fervor and money for it to fight? Hezbollah v. ISIS, the match of the ages. Shia v. Sunni! Perfect, the conflict that has no end or resolution, since the initial grievance is 1400 years old. arms merchants must be licking their chops, think of the bottom line, the sales, the soaking of KSA and Iran as they duke it out over the Middle East. The Military Industrial Complex has really outdone itself this time!! Everybody get a good seat, CNN, Fox, BBC, too, big revenues from this one, the shocks thrills and chills. Better than Christians in the Colosseum. Feed the beast, and become one.

extremists like this guy or nasrallah don't care about God's message if it goes against their interests... they twist the message to fit their propaganda! the Church has been doing this for hundreds of years too!

tell us which lebanese extremist sunni called for the slaughter of minorities in Lebanon?

first time I disagree with u jnoubi.
Nasrallah and his Iranian money are no excuse for what some shias are doing. Everybody has a brain and a heart, and should use it. We are all responsible for what we do...

Khmeynists and takfiris are brothers, they should be hanged on same tree...

Sunnis are the worlds cancer

Sunnis have been a growing cancer since the death of the prophet.

let us be clear about this: this guys is a terrorist!

that said: when did we start seeing and hearing about these guys? yes it is after hizbushaitan went to liberate palestine in Syria to defend the weapons of the so called resistance!

stop the BS Iranians: you are the cause of all that is happening to us.

HA brought these characters and their retaliation onto the shia community no ifs or buts about it. @defacto, there are daily flights to tehran from beirut so you can hop on any of those and save us some space in lebanon.

Expel all Syrians from Lebanon

the country has had enough, they have brought nothing but security problems, political problems and economic problems

btw, syrian mukhabarats should know that takfiris dont wear hat and dress like these, ali mamluk please find others...

Simple equation. It all started with Hizballah. The more they abuse their presence and existence, and inflict and force themselves in every aspect of Lebanese politics and daily life, the more people are going to get bothered and want them out. They started because they want to liberate Palestine, now they are liberating Syria. The party should be called The Liberators. End Hizbullah, Lebanon will be a real country. Period.