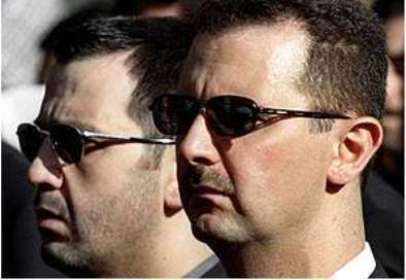 A senior Syrian general who was assassinated in 2008 was most likely the victim of a power struggle between figures linked to Bashar al-Assad's regime, France told U.S. envoys at the time.

According to a U.S. diplomatic cable published online by the whistle-blower site WikiLeaks, a senior adviser to President Nicolas Sarkozy and an expert from the foreign ministry branded the killing a "mafia-like hit".

Brigadier General Mohammed Suleiman was slain in the Syrian coastal city of Tartus in August 2008. At the time it was widely rumored that he was gunned down by an Israeli sniper hidden on board a yacht moored offshore.

But, according to the U.S. cable, French intelligence believed that he may have been killed because he "knew too much" about the Assad regime's nuclear program and ties to Lebanon’s Hizbullah.

Alternatively, he could have been a victim of a struggle for influence and access to corrupt wealth between rival members of the business elite linked to Assad's ruling clan, Sarkozy's adviser Boris Boillon told U.S. officials.

"When asked how he interpreted the killing, Boillon said several theories presented themselves, the only common denominator of which was internecine rivalry in the entourage close to Bashar al-Assad," the cable said.

"He flatly rejected the notion that the Israelis had taken out Suleiman, particularly the theory that a sniper had shot him," it continued

"French information was that the hit was more 'classic' and 'mafia-like' with police stopping traffic in the immediate vicinity, bodyguards looking the other way, and the assailant pumping a slug into Suleiman's head."

The official floated a theory the killing could have been ordered by Assad's powerful brother, Maher al-Assad, a military commander and regime insider -- sometimes referred to as the second most powerful man in Syria.

"Boillon described Maher as ambitious, a bit of a wild man, and determined to increase his power and influence within the inner circle," the cable said.

The envoys said "Boillon's rundown of the various theories sounded like he had recently read a finished French intelligence assessment of the situation."

Ludovic Pouille, a senior Middle East expert at the French foreign ministry, was "less forthcoming" about his theories in a separate 2008 meeting with U.S. officials, but he agreed the killing looked like an inside job.

"He was equally categorical in disputing the theory that the Israelis were responsible," the cable recounted.

According to Pouille, the French ambassador in Damascus believed Suleiman might have died because he knew too much about the murder of former Lebanese prime minister Rafik Hariri and about Syria's nuclear program.

According to the cable, French officials said Sarkozy planned to "cultivate his personal relationship with Bashar" hoping to convince him to make peace with Israel, “stop destabilizing Lebanon” and review his ties with Iran.

so its all about israel...

Brigadier General Mohammed Suleiman was for along time the point man between the Syrian leadership and Hezballah and Imad Mughnieh in particular. Which begs the question whatever happened to Walid Mouallem's investigation into Mughnieh's murder the results were going to be published withing days but never were.

I heard Israel also was behind the car accident that killed Assad's brother and that Hafez was killed by an Israeli doctor.......

So these guys are telling us that they are so dumb that they keep getting f....d day after day by Israel! Who said they might like it?

I slipped on a banana and broke my leg, it was an Israeli plot.