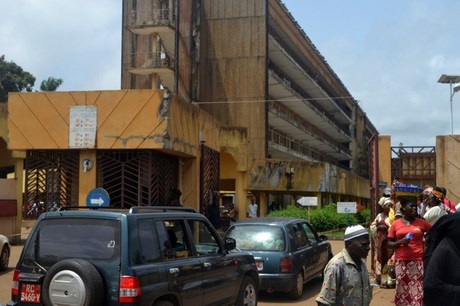 In a hospital in the Guinean capital Conakry, a doctor can barely conceal his anger over the Ebola crisis sweeping the country and the officials who once made hopeful pronouncements about the end of the outbreak.

"They lied, so our partners, and even the local population, put down their guard. And this is the result -- the epidemic has spread throughout the country," says Dr Alphadio from the Donka hospital.

Guinea is at the heart of west Africa's Ebola outbreak which has seen the deadly virus -- a hemorrhagic fever -- cross between communities and over borders.

The World Health Organization has warned that "drastic action" is now needed following a recent surge in cases in Guinea, as well as in neighboring Liberia and Sierra Leone.

As of Sunday, there were 635 confirmed, probable and suspected cases of Ebola in the three countries, including 399 deaths, according to the WHO.

But while there may be a sense of urgency at the WHO and among international aid workers, medics in the country say that too little has been done to raise public awareness of a deadly disease that can kill up to 90 per cent of those who catch it.

Guinean President Alpha Conde has drawn particular ire for saying the outbreak seemed under control during a visit to the WHO headquarters in Geneva in April.

"For the moment the situation is well in hand, and we touch wood that there won't be any new cases," he said.

A few days later, during a meeting of regional leaders, he thanked his counterparts for joining him in Conakry "despite all the noise about Ebola".

The comment was not appreciated by staff at the medical charity Doctors without Borders (MSF), who have been active in the country since the start of the crisis and said on Monday that the epidemic in the region was now "out of control" with more than 60 outbreak hotspots.

"Because of the errors of our leaders, and whether they like it or not, the disease has spread to the interior of the country," says Dr Alphadio.

Kankou Marah, another medic at Donka hospital, accused the government of failing to tell people "the truth out of fear of scaring away investors".

Religious leaders are also telling the government to take action. An imam, Thierno Ousmane Camara, recently called on the president "not to play down this disease, which, sadly, is causing so much grief to families".

Ebola is spread by contact with bodily fluids including sweat, so just touching an infected person is enough to catch the virus.

The virus can fell its victims within days, causing severe fever and muscle pain, weakness, vomiting and diarrhea -- in some cases shutting down organs and causing unstoppable bleeding.

But an Agence France Presse journalist said that in the capital, Conakry, there has been no public information campaign on the radio or the television, while the bare minimum of infection controls have been deployed at railway stations, the airport and the port.

The few visible prevention measures tend to be the work of individuals, such as buckets of water outside restaurants for people to disinfect their hands.

Mamadou Dian Sidibe, a shopkeeper who lives near the border with Liberia, says people are not taking precautions.

"Everyone is afraid, but people are not protecting themselves. I have not seen a single health worker talking about it here," he says.

In the Liberian capital Monrovia, there is a similar sense of frustration at the perceived inertia of the government.

"Let's suppose that what we are hearing about Ebola is true, what is the health ministry doing to educate a population that is, for the most part, illiterate? Nothing," says Magdel Sneh, who works as secretary in the city.

As in Conakry, there has been no public awareness campaign, or any specific disease-prevention measures taken, bar the creation of isolation wards in the hospitals for suspected cases.

"We don't have the budget to run a vast public information campaign," one health official tells AFP, on condition of anonymity.

Even in some of the worst-hit places, many continue to live as if the disease did not exist.