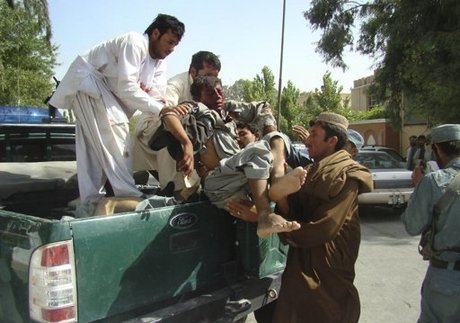 Six Afghan civilians from the same family were killed by a coalition air strike in the insurgent-hit east of the country, local officials said Friday.

A spokesman for the NATO-led International Security Assistance Force (ISAF) said he could not confirm civilians were killed but that several insurgents were among the dead in the operation at around midnight Thursday in Logar province.

Logar provincial police Chief Ghulam Sakhi Rogh Lewani said the operation targeted a Taliban commander with a bounty on his head known as Qari Hijran and had also killed civilians.

"Four Taliban militants were killed along with three Afghan army and six members of a family during the incident," he said.

The top official in the district of Baraki Barak where the incident happened, Mohammad Rahim Amin, claimed it occurred when a local teacher provided shelter for the commander in his home.

Although it is just south of the Afghan capital Kabul, there is a heavy presence of insurgents in Logar province.

An ISAF spokesman in Kabul said he could confirm that several insurgents were killed in the operation but not that civilians were among the dead, adding the foreign force was looking into the matter.

International forces are frequently accused of killing civilians in their operations in Afghanistan, an issue which is highly controversial with President Hamid Karzai and Afghan civilians.

ISAF insists it takes all measures it can to prevent civilian casualties.

There are around 140,000 foreign troops in Afghanistan helping Afghan forces to fight a ten-year Taliban-led insurgency. Limited coalition combat troop withdrawals have started ahead of a 2014 deadline for them all to leave.