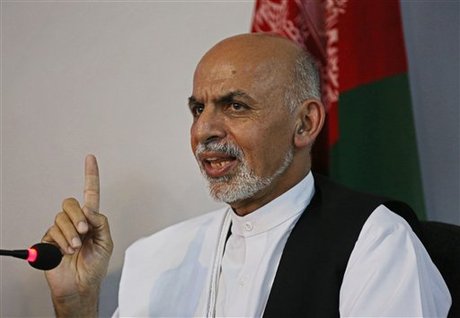 Former World Bank economist Ashraf Ghani won Afghanistan's presidential election, according to preliminary results Monday, but fraud allegations are set to spark a dispute over the outcome and stoke concerns of instability.

Ghani won 56.4 percent of the run-off vote to ex-foreign minister Abdullah Abdullah's 43.5 percent -- a major comeback for Ghani after the first-round election in April when eight men stood to succeed President Hamid Karzai.

Officials said the turnout was more than eight million in the June 14 vote out of an estimated electorate of 13.5 million voters -- far higher than expected, and a figure likely to fuel weeks of arguments about fraud from both sides.

The next president will lead Afghanistan at a pivotal time as U.S.-led troops end their 13-year war against Taliban insurgents and the fragile economy struggles with declining international aid.

"We can not deny fraud and violations in the process," Independent Election Commission (IEC) head Ahmad Yusuf Nuristani told reporters.

Nuristani emphasized that the results would now be subject to auditing and adjudication of complaints, before the official result released on about July 24.

"The preliminary result in no way means the announcement of the winner of the election," he said.

"After addressing all the complaints, the objections and the inspections, a change in the result is possible."

Last-minute talks delayed the results by nearly five hours on Monday, as the two campaigns tried to thrash out a deal over the fraud allegations that could yet derail Afghanistan's first democratic transfer of power.

Abdullah has vowed to reject the preliminary result, alleging he was the victim of "industrial-scale" ballot-box stuffing, while Ghani has said he won fairly.

Central to the talks is how many of the total 23,000 polling stations will now be put through an anti-fraud audit.

"We agreed for an audit of 7,000 polling stations, but they had other conditions that we couldn't agree with, so for now there is only partial agreement," Ghani's spokesman Daud Sultanzoy told AFP before the preliminary result.

Abdullah's spokesman Fazel Sancharaki said: "Our main demand was for the inspection of 11,000 polling stations under the close supervision of the United Nations. Seven thousand polling stations is not enough.

"The negotiations are still ongoing. If they produce a result, we will enter the process, otherwise... we will not recognize it."

Both sides said the U.N. was involved in the talks, but its spokesman declined to give further details.

Afghanistan's international backers have lobbied hard to try to ensure a smooth election process, but the contested outcome could realize their worst fears and raises the risk of civil unrest.

The deadlock has brought Afghan politics to the brink of chaos as the Taliban have underlined their strengthen with a major offensive in the southern province of Helmand.

Afghanistan has been battered by decades of conflict, and any power struggle would undermine claims that the hugely costly U.S.-led military and civilian mission has helped to establish a functioning state.

It could also threaten billions of dollars of aid pledges, boost the insurgents and even ignite ethnic unrest.

Ghani attracts much of his support from the Pashtun tribes of the south and east, while Abdullah's loyalists are Tajiks and other northern Afghan groups -- echoing the ethnic divisions of the bloody 1992-1996 civil war.

The U.N. mission in Afghanistan has highlighted the risk of political tensions spilling over into tribal violence, though protests have so far been peaceful.

President Hamid Karzai, who has ruled since the fall of the Taliban in 2001, is constitutionally barred from a third term in office, and he has not publicly endorsed any candidate.

All foreign combat troops will leave Afghanistan by December, with about 10,000 U.S. troops staying into next year if the new president signs a security deal with Washington.