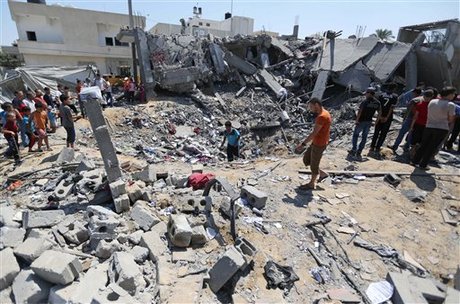 Fourteen people were killed Tuesday and dozens wounded in a number of attacks in the most serious flare-up in and around the Palestinian territory since November 2012.

An official from the pan-Arab bloc told Agence France Presse Arabi had "instructed the Arab League's U.N. representative to initiate urgent consultations within the Arab group calling for an emergency security meeting of the Security Council."

Earlier, Palestinian president Mahmoud Abbas asked the international community to "immediately intervene to halt this dangerous escalation which would lead the region to more destruction and instability."

Arabi said he had been "in touch with president Abbas to follow the latest developments in the Gaza Strip" while also continuing "consultations with Arab foreign ministers on this subject."

He denounced the "dangerous Israeli escalation" and warned against its humanitarian consequences in Gaza.

"The continued attacks on Palestinian civilians by Israel is a flagrant violation of international humanitarian law, the Geneva Convention and international resolutions on occupied Palestine," said the Arab League chief.

Meanwhile, the 57-member Organization of Islamic Cooperation (OIC), announced it would hold an "extraordinary" ministerial meeting Thursday in the Saudi city of Jeddah to discuss the "intensifying and fierce Israeli campaign against Palestine".

Israeli strikes on Gaza killed at least 14 people on Tuesday and wounded 80 more, the emergency services said in the most serious flare-up in and around the Palestinian territory since November 2012.

The deaths came hours after Israel announced the start of Operation Protective Edge, a military campaign aimed at stamping out rocket fire on southern Israel and destroying Hamas's military infrastructure.

Army figures show that since midnight, militants have fired 130 rockets at southern Israel, while the air force struck 150 "terror targets" in Gaza.

Arab league is a joke.

This action was telegraphed by Israel for over a week -- the AL would have been smarter to go to the UN before the situation escalated, once they realized that Egypt was unable to negotiate a cease fire.

The AL should also put Syria on the SC agenda, with 200k dead that is a more urgent crisis.