Arrests Made as Rockets Fired from Southern Lebanon Land in Israel, Drawing Retaliation 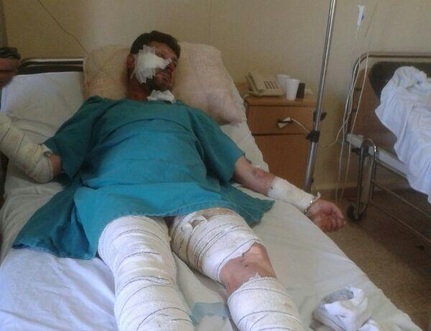 Several rockets were fired on northern Israel from the outskirts of the town of Mari in Hasbaya on Friday morning, drawing retaliatory Israeli artillery fire, the Lebanese army and the state-run National News Agency said.

The Lebanese army said militants fired three rockets between 1:00 am and and 6:00 am.

But the Israeli army said one projectile fired from Lebanon struck northern Israel causing no harm or damages.

Israel public radio said two Katyusha rockets slammed into an area north of Kiryat Shmona, one of which struck a road which was deserted at the time.

Military officials told the radio said they believed the rockets were fired by a small Palestinian group in an act of solidarity with militants from Gaza's Islamist Hamas movement who are engaged in a major confrontation with the Israeli army since Tuesday.

They said it was unlikely the rockets were fired by Hizbullah movement.

A third rocket failed to launch because of a technical malfunction in the area of Ain Arab at around 2:00 am. The rocket exploded while still on its launchpad, NNA said.

According to Voice of Lebanon radio (93.3), the Lebanese army found military gear and blood stains in the area.

He was severely wounded while firing a rocket towards Israel at dawn, reported MTV.

VDL (93.3) later said that the suspect is a member of an extremist group, confessing that he was accompanied by two Palestinians when firing the rockets.

The army said it also defused two more rockets at the scene.

Security forces and the army drew a tight dragnet in the two areas to search for the suspects standing behind the attack.

No one immediately claimed responsibility for it.

The Israeli army retaliated by firing about a dozen artillery shells on the outskirts of Kfarshouba and surrounding areas.

A Lebanese security source said "no one was hurt, the shelling hit the fields, not houses.

“The situation at the border is now calm, and one man has been detained by the security forces for questioning," said the source.

NNA identified the suspect as Samir Hussein Abou Qais, who hails from the town of al-Habariya.

It said the ISF Intelligence Branch arrested him after finding blood stains inside the Renault Rapid he was driving.

The ISF suspected that the person behind the failed missile launch in Ain Arab had used the car to escape.

UNIFIL said in a press release that Commander Major-General Paolo Serra is “in close contact with the parties urging maximum restraint in order to prevent any escalation of the situation.”

It added that peacekeepers reinforced their “presence on the ground and intensified patrols across the area of operations to prevent any further incidents.”

Serra said: “This is a serious incident in violation of U.N. Security Council resolution 1701 and is clearly directed at undermining stability in the area.”

“The need of the time is to maintain security vigil and to exercise utmost restraint against any provocation,” he added.

HA will deny it fired these rockets because it is at peace with Israel and at war with the syrian people.

no need to deny anything

What the heck? flamethrower._: "gas ONE camp wlo khayye" Really? What is wrong with people who suggest such a thing? Aren't people who advocate the mass murder of women and children savages? Never mind, I loathe what this forum has degenerated to. Even if this was an attempt at humor which no doubt the author will claim, it is in poor taste and immoral. Hitler gassed the Jews and Mr. flamethrower._ wants to gas the Palestinians.

lol.. just wondering, are we supposed to take you seriously, or are you just the forum's buffoon?

what bunker? did you see it?

tomorrow he'll have three private jets sitting at the airport, and 56 villas in Jbeil ;)

sorry for the multiple posting, seems like boutros harb really messed up the network

you should say sorry for the multiple postings and multiple accounts.

did he say it wasnt resistance? dont feel compelled to post when you have nothing to say, you end up sounding like a retard

Death to all traitors. Lebanese soil should not be used against anybody regardless. We had enough destruction/s over z years defending the fu—ing Arab cause and for what?
Palestinians, Syrians, singikritis or whatever go home and leaves alone, your time is up, u are not welcome anymore.

hezz has nothing to gain by helping hamas; israel becomes the enemy of hizbollah only when hizbollah needs it on to justify its presence in lebanon

So you want to expel the majority of Lebanese, the Shiites of Lebanon, in order to make your "Christians get half of Parliament" so-called constitution rational and fair?
Or do you want to give the Shiite majority of Lebanon, the more than half of all Lebanese, who are Shiite, full voting rights so they can, in all likelihood, elect Hezbullah officials to be the official government of the nation?
Or do you want to stay where you are, like a man with a noose on his neck standing on a chair afraid to take off the noose and afraid to jump?

The 26 of December 2005 rockets were fired on Israel from Ghaza not Lebanon.

Find the Palestinian terrorists responsible and arrest them.

Is firing rockets at Israel the enemy independent from the Lebanese state a crime now or is the crime here encroaching on intellectual property and infringing upon trademarked exclusivity?

you see resistance is sect exclusive so is ethnic cleansing. If these rockets were fired by the terrorist HA then it is all fine and god bless the resistance. But, if someone other than shias fire on Israel then they are terrorists and traitors to the cause.

to go somewhere else
https://www.youtube.com/watch?v=X1Bf2MjJliw

.. this country is for the patriotic ones

I'm confused here do you except this or not.

1. Suicide bombing is excepted or not in your ideology?

2. That HA was fighting in Bosnia?

3. your leader answers to no one in Lebanon?

I watched the videos but, what is your intention in posting the links if your a HA supporter?

What is the authority for these numbers:
"We have 1.4 mio Shiaa, 2 mio Christians, 1 mio Sunni & 0.6 mio Druze" ?
When was the last time Lebanon did a census by sectarian affiliation? 1934? "Because the issue is too controversial"?
What is the informed international opinion on the sectarian demographic proportions in Lebanon?
Noam Chomsky, who might stand as reasonably neutral, thinks the majority of Lebanese are Shiite. My (informed?) guess on the Christian share is thirty percent.
The practical test is, why is Hezbullah so influential and the Lebanese government so weak? The only thing that works in Lebanon, besides Hezbullah, is Boutros Harb's backbone. He can stand bent at the waist at a ninety degree angle for hours. And al Rahi asks God to make racism okay retroactively. What a shepherd!

Extremist Sunni Arabs are the source of all problems and stupidity in the whole world***
Thank you.