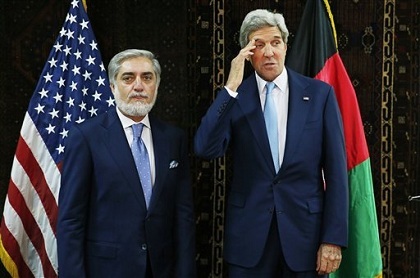 U.S. Secretary of State John Kerry Saturday held a second day of talks with Afghanistan's feuding presidential hopefuls, seeking a deal to "clean up the tally" after disputed elections.

Despite back-to-back meetings on Friday with rivals Abdullah Abdullah and Ashraf Ghani and other officials that stretched deep into the night, U.S. officials said an accord was not yet on the table.

The deadlock over last month's run-off vote to succeed outgoing President Hamid Karzai has plunged Afghanistan into crisis and dented U.S. hopes of a smooth transfer of power as Washington seeks to withdraw all its troops by late 2016.

On a day of intense diplomacy on Saturday, Kerry met Abdullah for about an hour and 20 minutes before holding talks with Ghani and meeting Karzai.

Under a proposal put forward by the United Nations, the country's election commission would audit ballot boxes from just over 8,000 polling stations where suspicions of ballot-stuffing have been raised.

While Ghani's campaign has embraced the U.N. plan, Abdullah's team remains skeptical, arguing the proposal to review some 44 percent of all votes cast fails to address all their concerns.

On Friday Kerry stressed that results released on Monday showing Ghani in the lead with some 56 percent of the vote were only "preliminary".

"They are neither authoritative nor final, and no one should be stating a victory at this point in time," Kerry said.

"We want a unified, stable, democratic Afghanistan. It is important that whoever is president is recognized by the people as having become president through a legitimate process," he said.

Abdullah, who has already lost one presidential bid in controversial circumstances, has declared himself the true winner, saying massive fraud robbed him of victory in the June 14 run-off vote.

U.S. officials told reporters that "many ideas were under consideration" but that the initial talks had been "constructive" and "substantive".

"One is cleaning up the tally, so to speak, to the extent possible so that the process is more credible. But two, creating a dialogue where the Afghans can have the conversation" on a path forward, the official said.

Another U.S. official said the U.N. audit would be very important. "There were serious allegations of fraud that were raised that have not been sufficiently investigated," he said.

Little headway seemed to have been made, however, in persuading Ghani and Abdullah to meet and discuss how to break the deadlock.

In a boost for the top U.S. diplomat's efforts on Friday, Ghani gave his support to a wide audit of the elections.

"Our commitment is to ensure that the election process enjoys the integrity and the legitimacy of the people of Afghanistan and the world," Ghani said Friday.

"Therefore we believe in the most intensive and extensive audit possible to restore faith."

The U.N. plan presented to Karzai late on Thursday involves auditing polling stations across 34 provinces, a process that would take two weeks.

They would be selected for checks according to five criteria that could indicate fraud -- such as if the results were multiples of 50, or where women's polling stations were staffed by men.

If agreed, some 8,050 polling stations would be audited, involving 3.5 million ballots, or 44 percent of all ballots cast.

Abdullah, a former anti-Taliban resistance fighter, draws his support among Tajiks and other northern Afghan groups, while Ghani is backed by Pashtun tribes of the south and east -- a disturbing echo of the ethnic divisions of the civil war in the 1990s.

Thirteen years after the 2001 U.S. invasion ousted the hardline Taliban Islamic regime, all sides are keen to maintain the gains made in such areas as literacy rates and women's rights.

But Afghan forces know they will increasingly have to stand up to a resilient and bloody Taliban insurgency on their own as international forces withdraw.

Washington also wants a signed deal on protecting U.S. forces left in the country until late 2016.

Underlining the parlous security situation, as the leaders met in Kabul a roadside bomb in the restive southern province of Kandahar, the Taliban heartland, killed eight civilians.