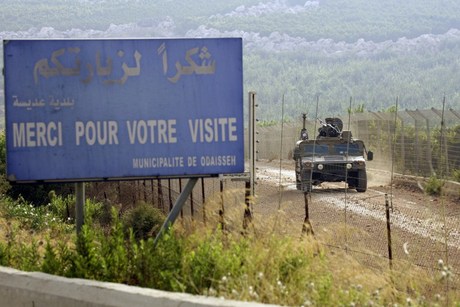 Earlier on Monday, the Lebanese Army found two launchpads in the Tyre region from which rockets were fired Sunday night at northern Israel, as the United Nations Interim Force in Lebanon (UNIFIL) described the incident as a “serious violation of U.N. Security Council resolution 1701.”

“After a search operation, an army force found this morning two rocket platforms in the aforementioned region,” an army statement said.

The military said investigations were underway in coordination with UNIFIL to “identify the perpetrators and arrest them.”

An earlier army statement had confirmed that “two rockets were fired from an area south of the city of Tyre towards the occupied Palestinian territories.”

Troops immediately staged patrols in the region and imposed a security cordon, the statement added.

In retaliation, the Israeli army fired “25 artillery shells at the outskirts of the southern towns of Majdal Zoun and al-Mansouri and the Jib Sweid area.”

“Six flare bombs were launched over the towns of al-Hinniyeh and al-Amriyeh and no casualties were reported,” the Lebanese Army added.

“Israeli authorities informed UNIFIL that two rockets impacted at sea and one in Northern Israel, south of the Blue Line,” the U.N. peacekeeping force added in its statement.

“This is the third incident in a week involving serious security breaches south of the Litani River. UNIFIL in coordination with the Lebanese Armed Forces is enhancing security control in the area and has intensified patrols to prevent any further incidents that endanger the safety of the local population and the security of southern Lebanon,” it said.

UNIFIL added that it has launched an investigation into the incident “that amounted to a serious violation of U.N. Security Council resolution 1701, clearly directed at undermining stability in the area.”

Three rockets were fired Saturday at Israel from the same region and a rocket was launched early Friday from the southern region of Hasbaya. A man has been arrested over his involvement in Friday's attack, which he said was in solidarity with the Gaza Strip.

At least 184 Palestinians have been killed and around 1,230 wounded in the Israeli operation dubbed Protective Edge, which started before dawn Tuesday in an attempt to halt rocket fire by Gaza-based groups.

And the sunni brothers are fighting..... Oh yea. The last time they fought israel was.... Oh yea. Zip it hypocrite scum

Egypt & Jordan made peace with Israel.

Do we choose war over peace?

Do we take land back by force?

Responding to your sectarian answer.

It is better to avoid a provoking statement then engage in it.

The last time they fought Israel was....

Filthy Palestinian terrorists. Throw them all out of Lebanon.

Where do you send them, Israel won't take them back.

HA don't forget supports their cause & so does Khomeini.

Let LAF step back as it Respectfully does for HA & force their way into Israel.

*... & let the Palestinians in Lebanon force their way into Israel.