Hundreds of Kurds Enter Syria from Turkey to Fight Jihadists 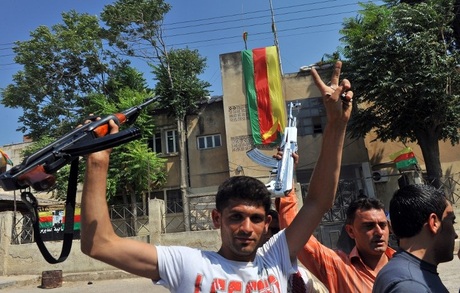 A Kurdish Syrian activist said the flow of fighters came as the Kurdistan Workers' Party (PKK), blacklisted in Turkey as a terrorist organization, gave orders for Kurdish fighters to move to protect Kobane.

"Fighters started going into Kobane from Turkey some four or five days ago," said Havidar, who goes by only one name.

"But the latest entry, last night, came after orders from the higher leadership of the PKK. Last night, there were celebrations in Kobane -- fighters were firing into the air as they arrived in the town," he told AFP.

The Observatory's Abdel Rahman also said the mobilization had come after a call by the PKK, which has branches in Turkey, Iran, Iraq and Syria.

"The Kurds are preparing for an assault by the Islamic State," he said.

Syrian Kurds have been fighting the IS for many months.

"But this is the first time that the jihadists appear to be advancing while the Kurds are suffering real setbacks. That is because IS has brought in a lot of weapons from Iraq," said Havidar, referring to weapons seizures from the Iraqi army amid an IS offensive there.

"Kurds going in to fight are from everywhere -- Turkey, Iran, Syria and others. Even some Kurds based in Europe are saying they want to go fight," he added.

Kobane, under siege by advancing IS troops, is important because it is located between Raqa -- the jihadists' main bastion -- and Aleppo, where IS has made recent advances.

"The situation is certainly going to get worse before it gets any better," said Havidar.

The IS proclaimed an Islamic "caliphate" in late June, straddling Syria and Iraq.

Once welcomed in Syria by some rebels seeking President Bashar Assad's ouster, the jihadist group's systematic abuses and quest for domination turned the opposition against it.

Rebels launched an offensive against the IS in January this year, but Kurdish Syrians, whose towns are located along Syria's border areas, have been fighting the jihadists for longer.

Havidar said: "IS is fighting the Kurds not for religious or ethnic reasons -- it simply wants their territory because it is strategically located along the borders, and because it is near IS bastions."

Abdel Rahman added: "It's a life-or-death battle for the Kurds. If IS takes Ain al-Arab, it will advance eastwards towards other Kurdish Syrian areas, such as Hasakeh in the northeast."

Karim ... Who has lost almost 10,000 soldiers fighting ISIL? Let me give you a hint: The revolutionaries.

According to m8 parrots, Turkey supports ISIL. How come they are allowing hundreds of Kurdish fighters to cross into Syria and join their compatriot!!