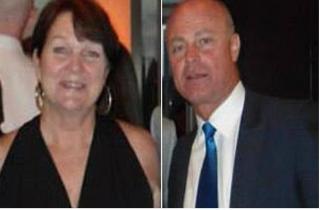 Two Lebanese nationals, holding the Australian citizenship, were among the 298 people on board the Malaysian jetliner that was shot down over Ukraine.

According to Voice of Lebanon radio (100.5), Albert and Mary Rizk are among the victims who died along with dozens of others in the tragedy on Thursday.

They live in Melbourne, Australia.

Dutch authorities said 27 Australians were among the dead.

At a news conference in Kuala Lumpur, Malaysia Airlines updated its nationality count of passengers, saying the plane carried 154 Dutch, 43 Malaysian – including the crew-, 27 Australian, 12 Indonesian, 9 British, 4 German, 5 Belgian, 3 Filipino and one person each from Canada and New Zealand.

Passengers on the plane included a large contingent of world-renowned AIDS researchers and activists headed to an international AIDS conference in Melbourne, Australia.

News of their deaths sparked an outpouring of grief across the global scientific community.

I await the day when I will read ONE meaningful post, ONE counter argument, ONE credible or mature info from you, ..flamethrower... , but alas!

Did your parents call you idiot after your grandfather or (junior) after you father?

Dude, seriously, rawwi2a shwayy. Read the news from other news sources than Naharnet. There is a high probability that the pro-Russian did indeed shoot it down, thinking it was a Ukrainian Antonov plane, with Russian-made Buk missile systems that they captured from the Ukrainian army. Go listen to the alleged "intercepted communications" (Google it) - this was a terribly tragic mistake, as every untimely death is, and you can hear it even in the voices of the rebels.

russia will pay a high price for this murder.

May they all rest in peace . Amen

Ok correction, the Russian Jews did it ! :)

humans are even more worthless now than before... that's a true statement!

did anybody hear about roar ?

Sad. But let's hope the monetary compensation for their heirs will be hefty enough. After all, someone lucky should be able to buy real estate in Lebanon. A shack labeled a villa in Mayrouba sells for $990,000 with a view that overlooks... well... umm... duh... nothing spectacular???. What a steal!