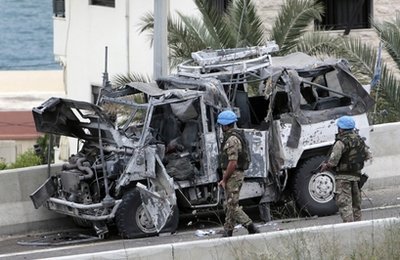 The U.N. Security Council on Tuesday strongly condemned attacks on U.N. peacekeepers in Lebanon as it renewed the key force's mandate for another year.

The 15-nation Security Council condemned "in the strongest terms the terrorist attacks against UNIFIL" on May 27 and July 26 in which six Italian troops and six French soldiers were wounded.

The council also condemned border incidents on May 15, when Israeli troops opened fire on protestors killing 10, and on August 1 when Israeli and Lebanese troops exchanged fire, each blaming the other for the shooting.

The Security Council, meanwhile, welcomed a "strategic dialogue" started between UNIFIL and the Lebanese Armed Forces aimed at increasing the capability of the Lebanese military in the south of the country.

A western diplomat, speaking on condition of anonymity, said: "In adopting this resolution, the council is again showing its support to UNIFIL, which plays a crucial role in a region going through unprecedented instability."