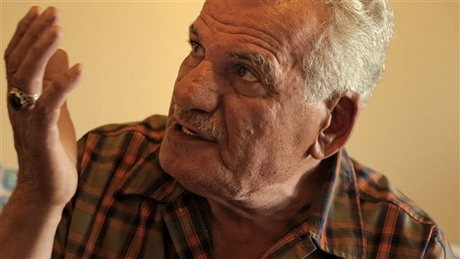 U.S. federal agents have arrested a Lebanese man who the Irish government says is a suspect in the abduction, torture and killing of two Irish soldiers serving as United Nations peacekeepers in Lebanon 34 years ago.

U.S. Immigration and Customs Enforcement arrested Mahmoud Bazzi on Tuesday at his home in the Detroit suburb of Dearborn. The agency arrested Bazzi for "administrative immigration violations" not directly in connection with the killings in Lebanon, spokeswoman Gillian Christensen told The Associated Press last week.

She said he would be held "pending removal proceedings." Bazzi's next court date is July 31.

"I hope this is the start of a process to bring to justice the alleged perpetrator of what was a heinous crime, the torture and murder of two innocent Irish peacekeepers," Coveney said in a statement.

Bazzi has denied killing Derek Smallhorne and Thomas Barrett in 1980, telling the Detroit Free Press he once falsely confessed to the slayings because he feared a Lebanese militia would kill him unless he lied.

While not specifically citing the accusations against Bazzi in his native Lebanon, Christensen said the Department of Homeland Security "is committed to rooting out alleged human rights violators who seek a safe haven in the United States."

"ICE's Human Rights Violators and War Crimes Center investigates human rights violators who try to evade justice by seeking shelter in the United States, including those who have participated in war crimes and acts of genocide, torture, the use of child soldiers and extrajudicial killings," she said in an email to the AP.

Anyone who murders innocent people in cold blood like that are likely to be FSA-Al Qaeda sympathizers.

Bazzi family! I do not think so!

They chant "Death to Amreeka" yet they would do anything to immigrate to Amreeka.

Its true. Anything at all!

I live 45 minutes from Dearborn. Its actually pretty nice in Dearborn the Shiite did a nice job.

@zahle1: Dearborn does remind you of home doesn't it? I mean it is very similar to Dahieh, same shops, same faces, same accent, same smell.