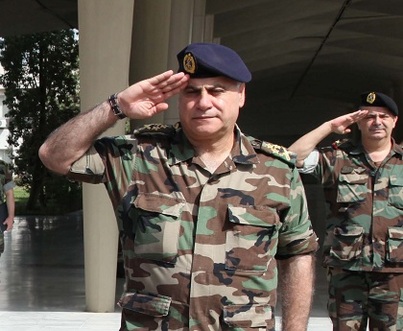 He emphasized ahead of Army Day that the army is prepared to protect Lebanon's southern border and deploy to confront Israel.

Qahwaji added that the dangerousness of the situation requires diligence in order to preserve the role of the army and protect Lebanon's “unique identity.”

He also called on officers to remain “loyal to the nation and avoid getting embroiled in sectarian disputes.”

Furthermore, he hailed the implementation of the security plan adopted in April in the northern city of Tripoli, saying that it helped restore calm and stability there.

The plan, carried out by the army and security forces, is aimed at cracking down on armed groups and gunmen that have created instability in Tripoli in recent years.

Dozens of suspects have been arrested, while others remain at large.

A similar plan was adopted in the eastern Bekaa region, while another one will be carried out in Beirut.

what about the Lebanese Syrian border.
sorry we are not allowed to have a border

Israel is the least of Lebanon's worries.. It's the enemies from within you should be concerned..

You are misreading it southern. It means no need for your fake resistance who should pack up and go to Syria. I would ask Qahawaji to mention not only Lebanon's southern borders but also the eastern borders that are regularly attacked by the syrian regime.

you don't know who my friends are terrorist, so Zip it.

defending the country??? really southern? Why did Nasrallah say they went there to defend shia and shia villages? Is lebanon a shia country? Talk about eradicate, here read some news:

i dont know why you got thumbs down for...

There is no Israeli threat if we get rid of Hezbollah. hezb is the threat.

Guys, lets be realistic for a moment

Can the LAF confront israel with the weaponery they have?

I always was told by HA propagandist here that LAF have no military assets to face Israel.

HA won't disarm until this happens. But if Lebanon deploys them truly without being puppet HA pulling the strings.. There will surely be peace in the south.

No need for Israel to attack Lebanon.

But it's just that they filling the gaps while HA is away.

Well, if you confront the Khomeinist occupation militia, you won't need to confront anyone anymore then.