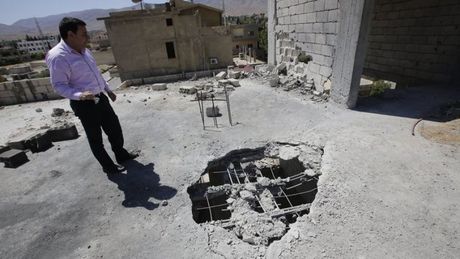 Two rockets landed near the Bekaa town of Hermel on Wednesday after being fired from the Eastern Mountain Range on the Lebanese-Syrian border, where clashes are still ongoing between Syrian rebels and Hizbullah fighters.

“Two rockets fell in the vicinity of the town of Hermel after they were launched from the Eastern Mountain Range,” state-run National News Agency reported.

It later said one of the rockets struck the Hermel-Dinniyeh public road as the other landed in the town's highlands. Both caused material damage.

The army later confirmed in a statement that two rockets fired from the Eastern Mountain Belt had landed in the vicinity of Hermel without causing casualties.

On Tuesday, four rockets fired from the same region hit the hills between the northern Bekaa towns of Miqraq and al-Labweh without causing any casualties.

Al-Qaida-inspired groups usually claim responsibility for suck attacks, arguing that they come in retaliation to Hizbullah's military intervention in Syria.