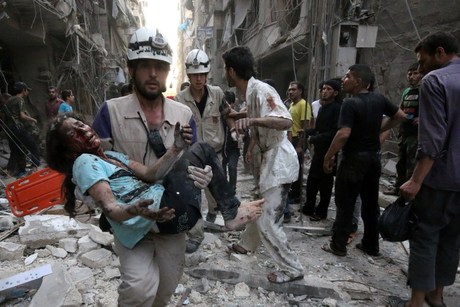 The United States on Wednesday unveiled $378 million in new humanitarian aid for the Syrian people, denouncing "appalling 'starve or surrender' tactics" by the regime of President Bashar Assad.

"The regime is asphyxiating half a million Syrians in Aleppo by obstructing deliveries of food, water, and medicine," Secretary of State John Kerry said in a statement.

"Syrians all over the country are being butchered at the hands of a ruthless tyrant," Kerry said, strongly condemning "the brutally indefensible and illegitimate Assad regime."

The regime was "dropping dozens of barrel bombs a day on the city and surrounding suburbs," he said.

"The world must act quickly and decisively to get life-saving assistance to the innocent civilians who are bearing the brunt of this barbaric war," the top U.S. diplomat added.

The new aid brings the U.S. total released for Syria since the start of the war three years ago to $2.4 billion, and Kerry insisted that it was "having an impact on the ground -- right now."

Some $1.2 billion has gone towards helping more than 4.7 million people inside Syria, and $1.2 billion is going towards aid efforts for some three million refugees who are being sheltered in neighboring countries.

U.S. aid was helping to feed some four million Syrians inside the country, and another 1.9 million had been treated in more than 300 U.S.-supported hospitals and health clinics across Syria, Kerry said.

"And our assistance feeds, shelters, and provides medicine and water to millions of refugees throughout the region in countries like Lebanon, Jordan, Turkey, Iraq, and Egypt, all coping with the burden of hosting thousands of refugees," Kerry said.

He insisted that Washington remained committed "to finding a political solution to this crisis" even though efforts to bring the regime and the opposition to the negotiating table collapsed earlier this year without any progress.

"We must bring the violence and bloodshed to an end, and work toward a future of dignity and freedom that all Syrians deserve," Kerry said.