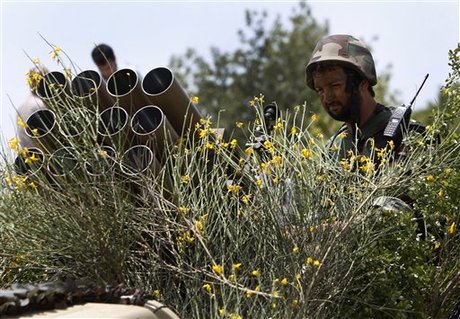 Syrian troops backed by Hizbullah fighters have killed at least 50 jihadists from the Islamic State and al-Nusra Front groups near the border with Lebanon, a monitor said Saturday.

The clashes raged through the night and into the morning on Saturday in the border region of Qalamun, said the Syrian Observatory for Human Rights.

Among the dead were at least seven pro-regime fighters, including government soldiers and members of Hizbullah, which backs Syria's President Bashar Assad.

Regime forces recaptured most of the Qalamun region in April, with many rebel fighters withdrawing from the strategic area or slipping across the border in Lebanon.

But pockets of opposition fighters, including jihadists, have remained in the mountainous region.

But in Qalamun, their fighters battled the regime and Hizbullah forces alongside each other, with support from some smaller Islamist rebel groups, the Observatory said.

Let the sectarian war continue. This isn't even a revolution anymore. The people's democratic aspirations have been sabotaged by terrorists be it Sunni or Shia.

Yeah Southern, that's why they're using Shia militias to help them against an overwhelming majority of Sunni rebels.

not all lebanese care about defending shia shrines in Syria and Iraq. Isn't that what nasrallah said were the reasons for his jihad in those countries...

Southern, Hizbollah acting on our behalf. My ass.

Hizbollah obeys the tiranic Iranian regime when in Lebanon we are supposed to be a democratic country.

southern, we lebanese, have an army to protect us, we dont need u and ur iranian boyfriends. Go and die for ur ayadollars somewhere else.

re: southern@
Hizbullah (HA) is NOT acting on behalf of all the Lebanese. I repeat, the Lebanese do NOT support HA's incursion into Syrian territory and against the Syrian people. The Lebanese government and people do NOT condone HA's actions. Recent history reveals this was initially a covert operation by HA to support Bashar's regime. It is no longer a covert operation. The fact that HA is blatantly invading another country and murdering its people is NOT something the Lebanese support. HA has forever tarnished its credibility to the Lebanese and all of the Middle East.

Good HA. I just wish u were fighting under some other guises just to keep us Lebanese out of this filthy war

Not even a month, a week* later. Bashar is not as strong as Saddam was. And the US made a fool out of Saddam.

No sectarian war?...
The guys fighting there are probably allian to the region, all came from chechenia or pakistian and no local fighters...
I was to think that the surian people took arms against the regime after deadly clash on peacfull protest and attrocities like hamza el khatib torture and assassination while under interogation by the syrian regime forces.. I was to think that some arab country sent money funding the rebels, and since nothing comes free islamic faction emerged (with the help of assad who let free in 2011 the now sham emire and around 700 other salafist (while keeping in jail the poor guy who's crime was to win a hourse championship against bassel el assad more than 15 y ago, now freed recently.. I was to think that assad was supported by lebanese uraky and iranian shiite milicias..
I was to think that assad managed to turn a popular uprising to a sectarian fight to be once again seen as protector of minorities..

But u r probably right, assad regime was loved by surian people and lebanese people to, it was a democratic, secular (but no civil code and civil mariage; secular a la libanaise..) and fair true socialist regime, (ask assad cousin who much they worked hard to get their fortunes..)
U must be right resistance, what could hv been wrong exepet that it was a zionist/wahabi/imperialist propaganda, u know just like israel assassinated hariri, kassir, hawi..most anti syrian regime figures..
Restistance, go have some chupachips man and elaborate on ur world conspiration theory 3a rawe2...

I am not shia, actually just PRO human ( GOOD HUMAN ) but I agree.

Anything is Better than IS, Al NUSRA and Groups related to Taliban, al qaeda. HIJaCKING Islam at the cost of Human life, power and the planners of this Divide of the middle east. I wouldn't be surprised if some were trained by Mossad, and of course Britain USA too.

your broken record is getting old.

Who cares how many syrian rebels get killed. The only number I follow is how many HA terrorists vanished and I am sure there are plenty. Great news indeed:)

We want more hizbshayton to be killed in syria. Keep them coming in boxes.

Reply to Titan, Just because I am sunni doesn't mean I like wahhabi's, the likes of Al Qaeda , Al nusra, Hezbollah the IS or any other group.

What I am though Titan is A music lover , a lover of good humans regardless of their PERSONAL religious faiths may be. A lover of wild life and Nature. OH and I forgot lol a lover of sports . All these things IS don't like. Heeeeeee lol.

Titan NO one except the Kurds and the Iraqi army which consists of sunni and shia soldiers is has stepped up and willing to confront IS in IRAQ.
As for the Zulgoota it is not meant directly to Hizbollah its directed to the GOOD RIDDENCE of IS and AL NUSRA. Ok.

I wish I could say that everybody gets along with one another and NO such groups exist but I cant which is a shame.
The real enemy if you want to know is Zionist ISRAEL.

You see the great Israel plan is to get western nations to gather up fighters aka (Al Qaida and IS) from around the world and stir up the middle east to create hatred between sects of the islamic faith. To deter they eyes of the world from the massacres it is creating in palestine. A lot of middle eastern young men and men from Chechnya ,pakistan and who know where else have joined these Groups and which have created the chaos that ISRAEL, USA along with Britain planned to CONQUER and DIVIDE. NOW I ask you has their plan worked. Look at the state of the middle EAST.

lol, just paky-stan and chechnya (a neo wahabi state?) what about countries like: france, britain (especially), even canada and australia have sent some men to join ISIS. nonetheless, muslims have been slaughtering each other and minorities for many years.. but perhaps, never at this intensity. blaming will get you know where (or anyone for that matter). reform your relgiion as it's become a heinous one and join the rest of the world in peace and harmony, co-existence and civility.

just received 9 yellow mujaheedine in the economy section of my kingdom.

Men if God, seriously
My God says: "do not kill"

did u read old testament ?

That is actually very true. Bashar's father and his henchmen were given the green-light to move into Lebanon in exchange for supporting the United States against Saddam during the first Iraq war and keeping the peace with Israel. Bashar has kept his father's henchmen and prior agreements all in place. He is a coward. His wife and family all know it. We all knew it long ago. He was never cut out for the politics of the Middle East. Now he has made murder of himself and pity of his people. He should have remained an opthalmologist.

I despise hezboys Syrians /Iranians but in this war I praise them against Saudi turkey Qatar etc..... the main sponsoirs to terrorism including my dick obama