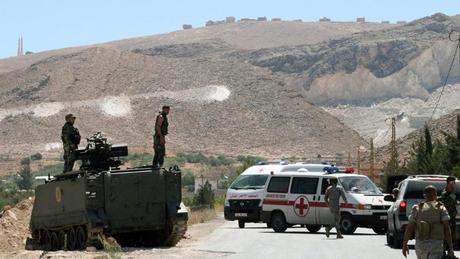 Al-Mustaqbal movement leader Saad Hariri has expressed full support for the Lebanese army and security forces, saying he stood by them to regain control of the northeastern border town of Arsal.

“Neither the state nor us would stand idle to the destructive plots of Takfiri groups,” Hariri told pan-Arab daily al-Hayat in remarks published on Monday.

The former prime minister said the terrorists “have no choice but to withdraw from the town,” which has been witnessing severe gunbattles between the Lebanese army and Syria-based terrorists.

The attack began Saturday as the rebels made a cross-border raid into Arsal, some 90 kilometers from Beirut, after the army detained Syrian Imad Ahmed Jomaa, who identified himself as a member of the terrorist al-Nusra Front.

The Front is one of the most powerful groups fighting to overthrow the rule of Syrian President Bashar Assad.

“Al-Mustaqbal movement considers the Lebanese army and the rest of the security forces a red line,” Hariri told the newspaper. “The attack on them is prohibited.”

“We hold onto our stance from the takfiri groups,” he added.

Hariri said he stood by the army and security forces “to regain control of the town of Arsal which has remained steadfast … because its residents have no option but the state.”

Hariri is expected to issue a detailed statement on the Arsal fighting soon, al-Mustaqbal sources said.

Yeslam Temmak Saad ..... he never waivered in his support for the LAF.

Show the LAF the money, Saad ..... he never waivered in his BS support for the LAF.

Really? He says one thing and the other, and you dont even notice.

Really? They just killed over 10 soldiers and he wants to let them just get away? That is unacceptable. Every single nus-rat in Arsal has to be put down, to send a strong signal that the Lebanese Army's blood is not cheap.
Already last year they let them get away with the slaughter of soldiers in Arsal, did that buy us peace and tranquility? No, it just meant that they can kill some more and daddy saad will make sure they can leave unharmed.

you want the army to do HA work for you.

and if anyone thinks this is HA's job, then say it. i'm sure HA will be very glad to do it.
but we all know where that would lead, dont we? you'd start crying and cussing and say that HA is killing poor innocent babies who only wanted to behead in peace.

stop fantasizing about HA, this matter does not concern it.

2- the army arrested a leader of nusra

now you little groupies are trying to save your favorite cockroaches, but that wont happen.
it's not a saudi spoiled brat sitting in riadh, or his internet groupies, who will prevent General Shamel Roukoz from settling the score between those rats and our Army.

there has never been a cure for sectarianism.

keep trying eagledown, dont give up. i support you in your quest to heal yourself.

FT you are 100% right here. Hariri, Mashnouk and Rifi were very clear that they are with the army all along fighting the terrorists. It is indeed scandalous what Kabbara and co have declared and should be treated as traitors.

by the way Rifi had blamed Kabbara and rejected his declaration. Surely it is not enough and should be kicked out of M14 all together.

they will disown him for his lack a courage, justice and nuance...
By not protecting them from syria and iran, he's sending them towards extremists ready to defend them...

got nothing more clever to say ?

Hariri Says Army is a 'Red Line,' Rejects 'Destructive Takfiri' Plans
..
26- 05- 2007- Hassan Nasrallah called for a negotiated settlement rather than a military assault on the Nahr el-Bared camp. "The Nahr el-Bared a red line. We will not accept or provide cover or be partners in this. Does it concern us that we start a conflict with al Qaeda in Lebanon and consequently attract members and fighters of al Qaeda from all over the world to Lebanon to conduct their battle with the Lebanese Army and the rest of the Lebanese?"

Cheikh Saad al-Haribi Telteyn al-Marajil MUST KNOW AND UNDERSTAND ONCE AND FOR ALL that his father is not more precious than the father of any son or daughter of any Lebanese army soldier that his lunatic followers murder. These brave soldiers get killed in cold blood and leave behind families that are barely capable of making ends meet and struggling to make a living in this dump of a country unlike Rafic Syria, Syria's best rafik, who left his family a fortune that affords them the luxury of living and vacationing in any country that they like and whenever they like.

Talk about your worthless family of uneducated lunatic Sanni retards.