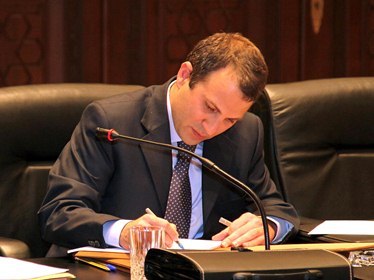 Foreign Minister Jebran Bassil called on Monday on the international community to support Lebanon and offer aid to the Lebanese army to confront terrorism, considering the region to be stuck between Islamist groups and Israel.

“Terrorism is moving from an area to another but it will surely be buried on Lebanese territories,” Bassil said during a meeting for the Palestine Committee of the Non-Aligned Movement held in Tehran.

He pointed out that the developments in the Gaza Strip, the Iraqi city of Mosul and the northeastern border town of Arsal are the same.

“The region has fallen between ISIL (the Islamic State of Iraq and the Levant) and Israel,” Bassil told conferees.

“They have the same principles,” he added.

Bassil vowed that Lebanon will break the connection between them.

“Killing in the name of religion is never justified and as Lebanese we settled our choices since the creation of our country,” he told officials gathered in Iran, noting that “there is no room for any unilateral decision in the world.”

The FM accused Syrian refugees without naming them of aiding gunmen in the town of Arsal.

“Instead of thanking the residents of Arsal, who welcomed them, they are assisting” armed men.

Arsal is home to 40,000 residents and increased to 120,000 after Syrians fled the war raging in their country.

The Sunni-majority area is sympathetic to the uprising against Bashar Assad, whose regime has regularly launched air raids in the area that it says target opposition fighters holed up in the mountainous region around Arsal.

The violence, which raged in Arsal on Saturday between gunmen and the Lebanese army, is the worst to hit the area since the beginning of the war in neighboring Syria in 2011.

The Lebanese official called on conferees to take into consideration Lebanon's fight against Israel, saying: “Palestinians will bury the Israeli terrorism like the resistance and the army in 2006 buried it.”

Israel launched a military operation in Gaza on July 8 in response to weeks of heavy rocket fire and has since carried out more than 4,600 airstrikes across the crowded seaside territory. It sent in ground forces on July 17 in what it said was a mission to destroy the tunnels used by Hamas to carry out attacks inside Israel.

The Gaza war, now in its fourth week, has left more than 1,800 Palestinians and more than 60 Israelis dead.

12 minutes ago Bassil called on the international community to urgently support the Lebanese army to confront terrorism.

How will Bassil explain to the same international community his alliance with HA, an internationally recognized terrorist organization that is waging war in neighboring Syria.

FT, its the other way around darling
the axis of evil includes at its best 20 out of the 197 countries in teh world
needless to say, they score highest on human rights, democracy, freedom of expression, to name a few

yet, we must thank HA for dragging them in, for succeeding in protecting shiite shrines in syria and iraq and failing to protect the holiest of all at least for us: Lebanon

Lebanon is not Iraq or syria. Lebanon is mountainous highly condensed and well armed, it is not a cake walk for anyone to invade and take over.Every house in Lebanon has a trained and armed fighter. Lebanon will be the death of these takfiris.

PREVENTIVE Action, are u freakin kiddin us
ISIS overran iraq in a few days becasue ur precious americans dissociated themselves, bargained with iranians, dismnatled the army, kicked out sahwet after leading teh war on qaida, mailik assigning history teachers as army chiefs to kick sunnis out, maliki ordering army to abandon checkpoints

as fro your preventive measures, very succesful i would say
wait do u understand surcasm, because it seems to me not only you cant read between the lines you cant even see the line

oh how nice ur referring to coke now, really dude captagon pills are no longer enough to fund ur precious allies?
in all cases, there's far too much at stake so no time to deal with personal issues
but wait, aoun is a life depiction of being self centered thought and the funny thing you all think ur included if he wins when ur not
again, too much at stake go watch tayyar, they're very high on army photos with crosses when teh army is well above all of u

bassel didnt mention his syro-iranian bosses control of the region, still hope aoun will be president...

Dear Bassil,
At least for once say your heart feeling: HA and ISIL are two faces for the same money "destroying the peace in Lebanon".
Ah sorry, I forgot that you are appointed in your position not by the will of Lebanese but by HA. You are only a puppet of the puppet.
Also I missed the point that your talking from Iran.