Govt. Declares Full Mobilization: No Leniency with Terrorists, Only Solution is Their Pullout from Arsal 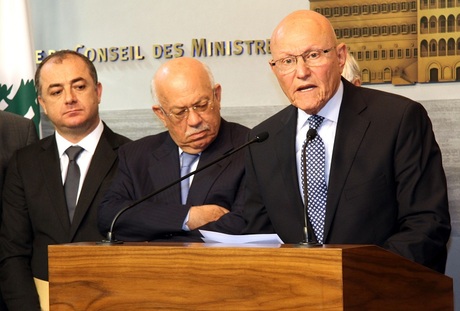 The government on Monday announced the mobilization of all its political and security agencies in defense of Arsal in the face of the “flagrant aggression,” noting that the only way out of the current confrontation lies in the withdrawal of the “terrorists” from the border town.

“Lebanon is facing a flagrant aggression against its sovereignty and security at the hands of obscurantist terrorist groups, which have dared to attack the army's dignity to execute a suspicious plot aimed at paralyzing the state and sowing chaos in Arsal and its surroundings,” Prime Minister Tammam Salam announced after an emergency cabinet meeting.

“The cabinet has decided to mobilize all Lebanese state institutions and security agencies to defend our country and confront any attempt to attack it,” Salam added at a press conference, during which he was flanked by several ministers in a show of solidarity with the army that is fighting deadly battles against extremist groups in Arsal.

The premier said the responsibility rests equally on the shoulders of “our armed forces and security agencies which have confronted the terrorists in defense of the land.”

“The army, which is offering one martyr after another, enjoys the full support of the government with all its political components, and it stresses that it stands shoulder-to-shoulder behind it as it carries out its sacred mission,” added Salam.

He underlined that the government will spare no effort to support the army as it defends Lebanon, noting that it has asked French authorities to “expedite the delivery of arms as part of the deal with Saudi Arabia.”

“There will be no leniency with the terrorists, no settlements with those who have violated Lebanese territory, and no political solutions with the takfiris,” Salam vowed.

He warned that the terrorists want to export their “sick practices” to Lebanon, underlining that “the only solution is their withdrawal from Arsal and its surroundings and the return of the state with all its agencies to this dear region.”

“We stress to all friends that our country will overcome the crisis the same as it defeated the previous ones. We send a special salutation to the good sons of Arsal and we assure them that their sufferings will not protract and that their state will not abandon them or leave them to be a prey to chaos,” added Salam.

“We bow in respect to Lebanon's military and civilian martyrs,” Salam said on behalf of the government, pledging that “the attack on national dignity will not go unpunished" and reassuring that "the cabinet is on alert."

Fourteen soldiers have been killed and 86 others wounded since the eruption of the battle on Saturday while 22 troops have gone missing, according to an army statement. At least three civilians have also been killed by the gunmen.

Around 21 policemen were also taken hostage by the armed groups on Saturday.

This headline got me excited that the gov was finally going to clear out the Iranian militia.

What Iranian militia bro. We have more than 6000 dogs killing our soldiers and invading our cities and you are still supporting them. What a dog. I am personally against the ha intervention. But seriously man.

Cyanide
I fully agree with you. I wish you can give some of your name to these thugs ISIS and Nusra maybe that would eliminate them

Bashir
Get real dude!! what Iranian militia? are you so oblivious to the sad reality?? since when ISIS or Nusra is Iranian?

It is disappointing the government did not condemn HA intervention in Syria and Iraq the direct result of which is what we have been witnessing for the last year and culminated in this terrible situation in Arsal.

more fake accounts by the lifeless bunch. you really dont have anything else to do, do you?

where's the delete-happy moderator? how come these fake accounts posting disgusting links remain up so long?

If the Lebanese continue to be blinded by sectarian emotions if not pure hatreds there will be more penetration of extremists from the Sunni and the Shiite sides to extend the duel going on in the Region and continue the "Battle of krabala" till nothing is left.
The smartest people in the Region are not that smart after all!

I agree with Bshir,
If we consider Daaesh, alnusra and all similar groups are Sea Monsters dangerous to our coexistence THEN we should not forget that HA threw the BAIT, against the will of the majority.
Every group not cooperating with the sovereignty of the country is bad.
Lebanon cannot survive in peace unless we agree on one ARMY and only one army.

What do you mean "withdrawal of the terrorists"? Our army needs to eradicate them. Prisoners can be put on a ship or something and abandoned at sea. Let them start their "Imara" on whichever shore they wash up on, but not on Lebanese soil.

Long live the army and Lebanon.