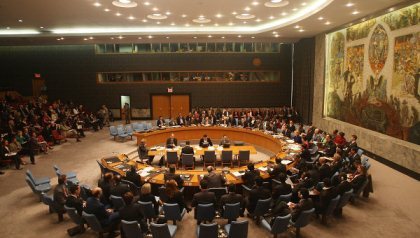 The U.N. Security Council on Monday condemned attacks by extremist groups in Lebanon, backing the government's military response but warning Beirut against being dragged deeper into the Syria conflict.

Scores of Lebanese soldiers have been killed and injured in three days of clashes with jihadists in the northeastern town of Arsal near the Syrian border, according to the Lebanese army.

The 15-member Council "expressed support for the Lebanese Armed Forces and the Internal Security Forces in their fight against terrorism and in preventing attempts to undermine the stability of Lebanon."

Member states "reiterated the need to further efforts to build up the capabilities of the Lebanese security forces to counter terrorism and address other security challenges."

The clashes in eastern Lebanon are the latest evidence of how Syria's conflict, which began with protests against President Bashar Assad in March 2011, has afflicted Lebanon.

The United Nations' top body called on Lebanese politicians to "preserve national unity" and "refrain from any involvement in the Syrian crisis."

Lebanon is hosting more than one million Syrian refugees and the Sunni majority are broadly sympathetic to the uprising against Assad's regime.

If the mindset of the politicians will cease thinking I am here for the people of my religion, but rather Iam here for all Lebanese regardless their religion,this would contribute to less polarisation and people will be united and behave as one nation, which was never the case since the independence of Lebanon.