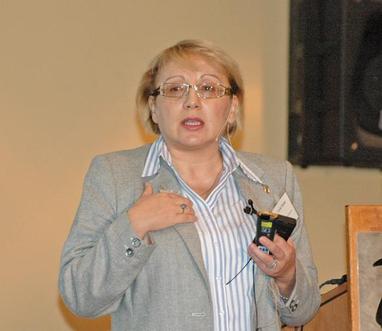 Azerbaijani authorities on Tuesday arrested the husband of a prominent rights activist who was detained last week on charges of spying for arch-enemy Armenia.

The prosecutor general's office said it had ordered the arrest of Arif Yunus, 59, who was charged with treason last week along with his wife Leyla Yunus. He had not been detained up to now due to his fragile health.

Prosecutors alleged the independent political analyst, who was also charged with tax fraud, had left his neighborhood without police permission and met with people connected to the case.

Yunus was arrested while visiting his wife in jail and was placed in detention for an initial period of three months, his lawyer Khalid Bagirov said.

Prosecutors alleged that the Yunuses had passed on to Armenian intelligence photographs of maps showing the location of military units, airfields and other strategic sites.

Leyla Yunus, 57, an award-winning campaigner and a fierce critic of Azerbaijan’s poor rights record, is head of one of Azerbaijan's leading rights groups, the Institute for Peace and Democracy in Baku.

She has won several foreign prizes and honors for her work, and has collaborated with Armenian activists advocating the reconciliation of their two countries, which have been locked in a decades-long conflict over the disputed Nagorny Karabakh region.

Any dissent in Azerbaijan is usually met with a tough government response.

Rights groups say the government has been clamping down on opponents since President Ilham Aliyev's election to a third term last year.