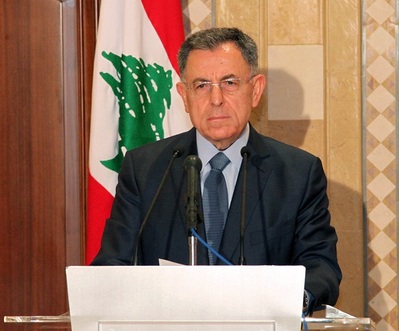 The March 14 coalition demanded the cabinet on Tuesday to close the border between Lebanon and Syria, calling also for army and international force deployment in accordance with U.N. Security Council resolution 1701.

"We call on the cabinet to work on closing the border between Lebanon and Syria in front of any gunman coming to Lebanon or leaving to Syria,” former Prime Minister and al-Mustaqbal bloc head MP Fouad Saniora said after an expanded meeting of the March 14 alliance at the Center House.

“The Lebanese people, who sympathized with the Syrian revolution and opened their doors to the refugees, cannot accept that any Syrian group points its guns at the army inside Lebanese territory, or kidnaps soldiers and security forces,” Saniora stressed.

He added: “We warned long time ago of the need to protect Lebanon from what is happening in Syria and we urged the cabinet to implement U.N. Security Council's resolution 1701 on all borders, but it did not do that.”

March 14 also lashed out at Hizbullah's interference in Syria, considering that it “subjected Lebanon, its cabinet and its people to great dangers.”

The coalition’s statement elaborated: “We have agreed on the Baabda Declaration and Hizbullah has agreed on it as well but without committing to its stipulations. On the contrary, the party's activities were contrary to the Declaration.”

“We demanded the party to withdraw from Syria but it said this matter is not in Lebanese people's hands. This holds the party responsible for the dangers the state and the army are facing,” it considered.

Accordingly, March 14 held “Hizbullah, and all those allied with it, largely responsible for what is happening in (the northeastern border region of) Arsal” and for attacks against Lebanon and its army.

“Hizbullah's involvement in the fighting in Syria has obstructed the authority of the consecutive councils of ministers, and this makes its withdrawal a priority,” the coalition declared.

The conferees' initiative to restore calm in Arsal also included the release of all detained army and Internal Security Forces troops held by militants, and the withdrawal of foreign gunmen from the Bekaa region and its surroundings.

"We also call on the cabinet to formally demand the United Nations Security Council to support the deployment of army troops along the border with Syria,” they said.

As well, the coalition urged local “factions to put their political differences aside and unite around resolution 1701's stipulations.”

"This is the only way to protect Lebanon from the evils of violence and terrorism that are invading the region.”

It also urged solidarity with the “heroic Lebanese army,” underscoring its rejection of the presence of any illegal armed group and the necessity to task the military institution with protecting national security in all regions.

Saniora said March 14 announces as well its solidarity with the “resilient people of Arsal against this violent attack against Lebanese sovereignty,” calling on the cabinet to provide protection to the region's residents.

As for the presence of thousands of Syrian refugees in the Bekaa and other areas around the country, March 14's statement encouraged the council of ministers to establish organized residential centers near the Lebanese-Syrian border.

Despite the Arsal clashes, the conferees considered that factions in the Syrian opposition would deplore and denounce the attack on Lebanon, its army, security forces and people.

March 14's extraordinary meeting comes as army troops have been battling foreign militants in Arsal since Saturday. The fighting has so far resulted in the martyrdom of 16 soldiers and the injury of at least 80 others. Twenty-two troops, meanwhile, went missing.

The battle started following the arrest of a member of the al-Qaida-linked al-Nusra Front and many political efforts have since taken place to restore calm in the border region.

International Deployment? Have some guts. Institute national draft and a national reserve and spend the money to have a real army. Disarm all militias including the Hizb that brought us the disaster we have been living in.

The Lebanese government need to institute a military draft. How much does it cost not to? You are wrong to think that any country is willing to send its people to protect your freedom. Also a draftee is a much lower cost than a regular soldier. A national reserve is a MUCH cheaper alternative still and are called in when needs arise. Otherwise, they are back home doing their regular jobs.

F.T please stop words in everyone's mouth. I for one have been calling all along for disarming ALL (starting with the Palestinians). I have not heard Nasrallah once say we are ready to disarm once the Palestinians are disarmed, but he always said once Palestine is liberated (which means never).
So on behalf of all other posters who have my positions I repeat DISARM ALL.

Of course it is all true, after all the source is Tayyar.Org

Deploy UN troops alongs the Syrian border and invite the germans that offered technologically advanced systems to Lebanon a couple of years back to guard the border.

FT: Obviously we ware to incompetent at the moment to reach practical solutions. How many decades do we need you think? Would we be capable of guarding the Syrian/Lebanese border?

Yeah the Russian have the latest tech man, how about Stalin is he your friend too?

OK., I will entertain you F.T.
I read the article and here is the Summary
It was the M-14 Government (Harriri as P.M, and Elias Elmurr as Defense Minister) were the ones who secured the Russian deal. And according to the article, the US pressure caused them not to accept the Russian arms gift. Assuming the article is true, how did the M14 Cabinet (which was heavily influenced by M8 Ministers) did any worse in arming the LAF than the pure M8 Cabinet which followed for 4 years and had total control over all decisions? Please explain.