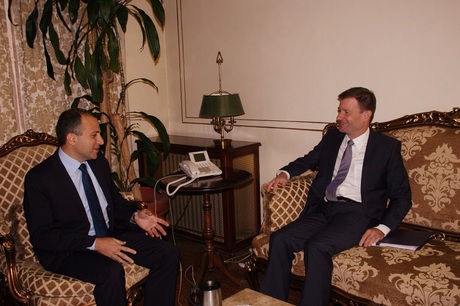 The U.S. embassy in Lebanon denied on Wednesday “claims” that Washington played a role in the rise of the Islamic State of Iraq and the Levant, which has so far seized several parts of Syria and Iraq.

“Any suggestion that the United States ever considered recognizing ISIL as anything other than a terrorist organization, or had any role in its creation, is false,” the embassy declared on its official account on the social media networking website Twitter.

“Allegations circulating in Lebanon to the contrary are a fabrication,” it stated.

Clinton has recently released an autobiography "Hard Choices" dealing with her years as the top U.S. diplomat.

And in recent days, media reports claimed that the former U.S. top diplomat “had admitted in her book that the United States created the Islamic States and planned on acknowledging its presence.”

But the rise of the Egyptian revolution against the Muslim Brotherhood halted Washington's plans, said these media reports.

However, Clinton's book does not include any reference suggesting that the United State acknowledges ISIL or has played a role in creating the extremist organization.

3a râsè w 3aynè; but why do the rest of us have to put up with this treacherous thief?

Ofcourse they do.. Nice try America

Bassil is a national embarrassment. He's become a multimillionaire with no talent and to pose such a stupid question to the US Ambassador reflects poorly on the whole country.

What a shame Bassil as FM. He is la honte du Liban

I think Bassil should change the sofas in his office first. They are so unfashionable for such a star.

He has no taste and its normal... fine taste is acquired through exposure to fine things, tasteful people travels reading etc... dig the past of Bassil.... who he could grow up with who he could be exposed to.. and its not getting better by the time and the millions accumulated.... money cannot buy "class" but it can buy the silence of people when they face someone without class...

now I understand!
ft does not know how to read!

has anyone noticed the frequency of ft posts on this site?