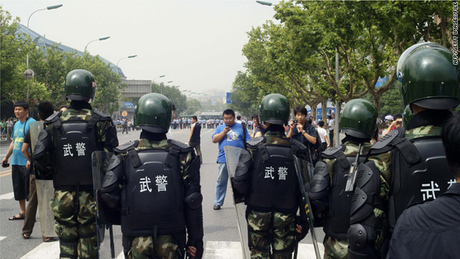 A Chinese human rights lawyer whose secret detention and alleged torture by Communist authorities prompted an international outcry was released Thursday after a three-year jail sentence, a close relative said.

Gao Zhisheng, who defended some of China's most vulnerable people including Christians and coal miners, has been held largely incommunicado by authorities since 2009.

"He is out (of jail), but he has not returned home -- he's at his father-in-law's house in Urumqi," Gao's relative told Agence France Presse by telephone, referring to the capital of the far-western region of Xinjiang where the lawyer had been serving his sentence.

The relative added that Gao's health was "normal, good", but asked not to be named because of the sensitivity of the matter.

It was not clear whether Gao, 50, will still be subject to some form of house arrest. His wife Geng He, who fled to the United States, told AFP she was "worried" he would face further restrictions following his release.

Gao was convicted of "subversion of state power" in 2006, and given a suspended sentence of three years in prison. He was immediately placed under house arrest and put on probation for five years.

In 2009 he was detained by Chinese security officers and held incommunicado for more than a year, with his family not told of his whereabouts.

After returning home for a month in March 2010, he went missing again. State media said in 2011 that he had been sent back to jail for three years after a Beijing court said he had violated his probation terms.

The decision was criticised by the United Nations, United States and the European Union, which repeatedly called for Gao's release, and by overseas rights groups such as Amnesty International.

Gao was once a successful lawyer, and in the 1990s won several high-profile cases for clients who sued over abuses by officials.

But his troubles began around 10 years ago, when he renounced his Communist Party membership and openly called for an end to a crackdown on the banned Falungong spiritual group.

He has openly accused police of torture, including electric shocks to his genitals and cigarette burns to his eyes.

Advocacy groups say that a campaign against rights lawyers has intensified under China's President Xi Jinping, who came to power in 2012.

Prominent Chinese human rights lawyer Pu Zhiqiang was arrested in May and later charged with "picking quarrels and causing trouble", prompting an outcry from rights groups.