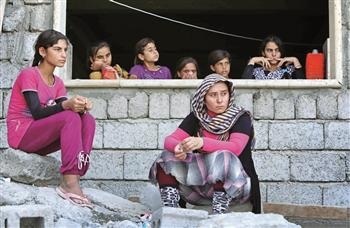 Up to 800 people from Iraq's Yazidi community have fled across the border to Turkey after escaping a lightning offensive by jihadists from the Islamic State (IS) group, Turkish officials said on Thursday.

The Yazidis are the latest victims of violence in the Middle East to find sanctuary in Turkey, after Prime Minister Recep Tayyip Erdogan's open door policy resulted in the influx of over one million Syrian refugees into the country.

"600 to 800 Yazidis have made their own way to Turkey since Wednesday," a government official told AFP on condition of anonymity.

"They have been accommodated by the local authorities in a housing complex for earthquake victims in the town of Silopi near the Iraqi border."

An attack by the IS at the weekend sparked a mass exodus from the northern part of Iraq including the town of Sinjar, where most of the population is made up of the Yazidi minority.

A Turkish foreign ministry official described the flight of the Yazidis as a "human tragedy".

"It is not possible for Turkey to remain indifferent to this. We will fulfill our responsibility," the official told AFP.

The Yazidi are a closed community that follows an ancient faith rooted in Zoroastrianism and are scorned by jihadists as "devil worshipers", a term the Yazidi themselves angrily contest.

The advance of Islamist militants in northern Iraq has alarmed Turkey, which is still trying to secure the release of dozens of citizens held by the IS in Iraq's second largest city, Mosul

"There is a circle of fire in the region surrounding Turkey," he said, adding that some neighboring governments had lost control of their countries.

Davutoglu said Turkey had increased humanitarian operations in Iraq, including a large package containing food and water dropped by Iraqi helicopters on the Sinjar mountains where the Yazidi community was stranded.

He insisted that the Turkish government strategy was based on helping Iraqis within their own territory.

"We could not do this during the Syrian crisis because a safe zone... could not be established," said Davutoglu.

Turkey is hosting 1.2 million Syrian refugees who have fled more than three years of brutal civil war. Many live in camps along the volatile border with others scattered throughout the country, including in Istanbul.

Officials say Turkey set up an aid center at the Habur border gate and dispatched trucks carrying food and medicine to cities across northern Iraq.

The government is also planning to establish a 20,000-capacity camp in the Iraqi Kurdish city of Dohuk for Iraqi Turkmens.

Davutoglu said Turkey was working "day and night" to bring back the dozens of Turkish citizens, including the chief consul, kidnapped in June by jihadists in Mosul.

He lashed out at speculation that the government was preparing a "hostage show" ahead of Sunday's presidential elections where Erdogan is the clear favorite.

Meanwhile, several Yazidi families who had been hiding from jihadists on a northern Iraqi mountain have used a safe passage provided by Turkish Kurdish fighters to reach Syria, a spokesman said.

"We opened a safe passage to protect the people of Sinjar and we started transferring them to West Kurdistan," PKK spokesman Bakhtiar Dogan told AFP.

West Kurdistan refers to the separatist Kurdish region of northern Syria which borders Turkey and Iraq.

"We engaged Daash (Islamic State) fighters several times and are ready to keep fighting for the sake of our people," he said, without specifying how many families had been rescued.

Kurdish fighters from Iraq, Syria and Turkey appeared to agree earlier this week to share the burden of containing IS fighters who have been making significant gains in northern Iraq lately.

Turkish officials said that at least 800 Yazidis have made their own way to Turkey since Wednesday.

Dogan confirmed that "any of those who crossed into Turkey probably got there by themselves because those who fled through our safe passage and with our assistance went to Syrian Kurdish towns."

The Sinjar mountains are a barren range stretching over around 60 kilometers (35 miles), with a peak at nearly 1,500 meters.

The Jihadists have become a menace on planet earth. Very sad for the middle east. Heartbreaking to see so many countries who are suffering at the hands of people like this. Israeli Zionists and Jihadists are not doing any good on earth at all. What will it take for international military support to assist countries who are affected by them. Why is the UNITED nations not acting. Talk is cheap by political leaders. Too many lives have been destroyed. When will the suffering end.