March 14 Reunites with Hariri: Controlling Border is Not Complete without Hizbullah Withdrawal from Syria 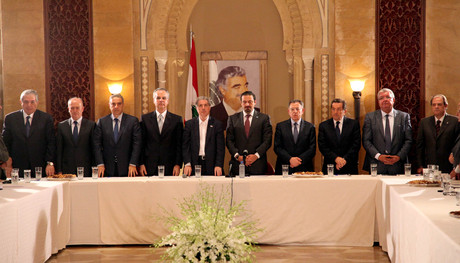 The March 14 coalition held an extraordinary expanded meeting at the Center House on Friday evening, in the presence of former Prime Minister Saad Hariri for the first time in over three years following his surprising return to Lebanon earlier in the day.

The conferees called for controlling the Lebanese-Syrian border by deploying army troops supported by international peacekeeping forces, according to the stipulations of U.N. Security Council resolution 1701.

"But controlling the border in all directions cannot be completed without Hizbullah's immediate withdrawal from the Syrian war to avert the repetition of scourges that threaten Lebanon and its security,” a statement released by the coalition after the meeting said, highlighting the unrest in the northeastern border town of Arsal and its surroundings.

"March 14 is committed to continuing its struggle for Lebanon's stability and sovereignty, and for freeing the country from all types of mandates by illegally armed” groups, the statement assured.

It also stressed the alliance's commitment to the state and to “all its political, military and security institutions.”

"These are the only guarantee for Lebanese people's safety and stability, and for Christian-Islamic coexistence,” it elaborated.

"Our only project remains building a constitutional state, starting from the election of a new president.”

The conferees lauded during the meeting Hariri's return as a proof of his “commitment to Lebanon's unity and independence.”

"His return is a ray of hope,” the alliance expressed.

As well, the March 14 leaders thanked Saudi King Abdullah for “supporting the Lebanese army and security forces in the fierce battle against terrorism.”

Hariri had arrived in Beirut earlier on Friday after spending three years abroad.

He left Lebanon in early 2011, months after the collapse of his national unity cabinet. He has repeatedly claimed that security reasons were preventing his return to Beirut.

He arrived on Friday amid security tension in the Bekaa region of Arsal, where army troops battled jihadist militants for several days.

The clashes resulted in the martyrdom of scores of soldiers, and the injury of over 80 others.

Prior to his return, the former Premier declared on Wednesday that Saudi Arabia has provided Lebanon's army with one billion dollars to strengthen security.

Hariri explained during a security meeting on Friday afternoon that he was tasked by King Abdullah with supervising the spending of the Saudi grant.

i don't doubt it

7 flamethrowers have casted (his) blablabla votes so far)

or it is blablabla who is currently posting on the other hariri article. How shameful !