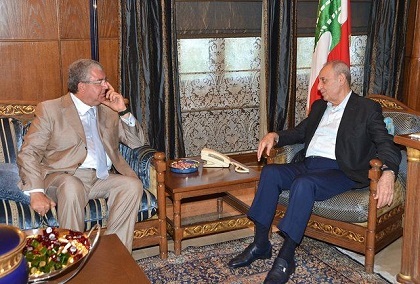 Interior Minister Nouhad al-Mashnouq stated on Saturday that the decision “to extend the term of parliament or not” lies in the hands of the political powers and government, reported the National News Agency.

He said after holding talks with Speaker Nabih Berri: “As interior minister, I do not believe that the security situation in Lebanon allows us to hold the elections on time in November.”

“I informed Berri of the decree I signed and presented to cabinet over calling electoral bodies to the elections, seeing as this is a measure that I must abide by as minister,” he explained.

He had submitted the decree during a cabinet session on Thursday.

Berri had reiterated on Wednesday his rejection of the extension of parliament's term for a second time, urging Mashnouq to carry out the preparations to hold the polls.

He had stated in June that the parliamentary elections should take place as scheduled even if a new president was not elected and MPs failed to agree on a new electoral law.

The 17-month extension, which took place in May 2013, came after the rival parliamentary blocs failed to reach an agreement on a new electoral law.

Berri had said that he would support holding the polls based on the controversial 1960 law if a new law was not approved by November.

The 1960 law adopts the qada as an electoral district and is based on the winner-takes-all system.

Idiots. There's always an excuse for something.

Get the security in order and make those elections happen. That's the least you can do.