Seven Arrested during Raids of Refugee Houses in Koura 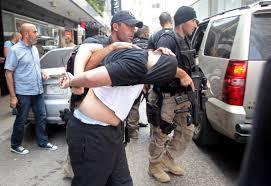 "An ISF Intelligence Bureau force raided al-Waha compound of the Hariri Project in Koura's Deddeh as well as other residential areas,” the NNA said, noting that these places host Syrian refugees.

"Seven people were arrested during the raids,” it announced.

On Wednesday, army troops raided the houses of Syrian refugees in Beirut, the Bekaa and the South, and managed to detain a number of people during the operation.

These raids and arrests come after army troops were involved in fierce battles against foreign armed jihadists in the northeastern border town of Arsal in the past week.

The clashes, which erupted on August 2 following the apprehension of a member of the al-Qaida-linked Al-Nusra Front, led to the martyrdom of scores of troops while over 85 others were wounded.

Army chief General Jean Qahwaji remarked on Sunday that the extremist fighters are foreigners of different nationalities who came from neighboring countries via the border in coordination with people residing in refugee camps.

there is no need to keep a record of the foreigners who came to lebanon to wage terrorism. these people are mostly undocumented, as terrorists, they were very careful not to leave their whereabouts as known- perhaps their families often do not even know. therefore, it's only realastic not to waste lebaense taxpayer dollars on sheltering these violent mongrels in a humane atmosphere- line them up, make them sit on their knees, and just shoot each one of these wahabi killers in the back of the head. throw them in the dirt and they will never be heard from again- it will actually be as if they never existed. do not record the event, being foreigners, there will never be any proof this extrajudicial act of justice ever occurred. alternative is to keep them in prison until their terrorist buddies abduct lebanese to trade them with. which do you prefer?