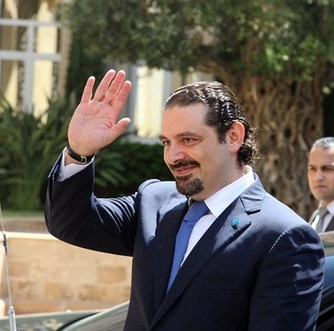 Former Premier and head of al-Mustaqbal Movement MP Saad Hariri expressed readiness to facilitate the election of a new head of state on the condition that the rival parties exert efforts to resolve the presidential deadlock.

Hariri's visitors said in comments published in An Nahar newspaper that the Sunni leader will not suggest the name of any candidate and would rather wait for the decision of Christians in this regard.

“He isn't discussing the names of any nominee with his visitors until an agreement is reached concerning the upcoming stage and the characteristics of the new president,” politicians quoted Hariri as saying.

However, Hariri highlighted that “a strong president is the one who is capable of reuniting all the Lebanese.”

On Saturday night, the ex-premier held a meeting with the ambassadors of the International Support Group for Lebanon.

Hariri discussed with the ambassadors of major powers the latest Saudi grant to boost security measures the aid that their countries could offer to the Lebanon.

Hariri had continued discussion, during separate talks with Prime Minister Tammam Salam and Army Commander General Jean Qahwaji, over the one billion dollar Saudi grant to the military institution on Saturday.

The head of al-Mustaqbal Movement made a surprise return to Lebanon on Friday morning after three years abroad.

His trip follows his announcement that Saudi Arabia, one of his chief allies, would give $1 billion to shore up the army and security forces against jihadists.

in before the haters..

at least someone believes in lebanon

“a strong president is the one who is capable of reuniting all the Lebanese.”

Nothing will unite or reunite the Lebanese. They are a group of sects with foreign allegiances and each wants a Lebanon that fits their vision. We all know it but we pretend otherwise.

Not that i disagree with u on most the lebanese religious and regional allegiance, but if we had a country with clear borders with law and justice applicable on all equaly, anyone can believe in what they want (in france there is still guys wanting monarchy, or corsica independance, or catalania independence in spain, and as long they abide by the law they can practice politics and work under the law to achieve their goals...
The problem in leb is one religious (like most leb) armed millicia is imposing its views on all for years now, they have forced us accpet provate phone network, private security, impunity from international (stl) and national justice(butros harb assassination attempt, hachem salman..) taken us to war (now they started funerals for martyrs dead during jihadist duty in irak....

We were in a civil war not that long time ago, we still have (like u said) a very fragile national identy (between those who want great syria, bassist syria, khomaiini, or who find help in ksa/france..) u know they might be playing with fire and drag us all into reall shit...
Now time to enjoy this day, i'll start by a chupachups...

100% agreeing Flamethrower ! General 'Aoun was protecting you -chupachups and all his ''friends''- from yourself' these guys have no dignity.

Clémentine is happy to announce that SHN has retained it's propaga.. err.. advertising services. We will be launching his new ad campaign very soon. After the highly successful "Thank You Qatar" and "We've Returned The Right To the Christians" we're proud to soon give you..
TADA!
"Nasrallah Ready to Impede Election of New President, Uses Christian Block As A Front."
GMA has been hired as the spokesperson and the fresh face of the campain.

Ues protecting me from myself... Sometimes the hard way like 7ayyar with his hezbos friends..
Bi charafak zahet....

Thank you mods, i mean jerry and co. for removing my posts.

of course, any post not laying blame on HA is not worth reading in your books.

amazing, even people in the "dahyeh" of Portugal want aoun as president!

@Vasco: how are you today my Portugali friend?

@Vasco: Yeth I agree, we need a regime to protect the christhians not ithith.

The only compensation the Syrian deserve is the head if ASSad.

its so sad to see a country summarized by two war lords: Aoun and Geagea...I am sure that within the 100's of thousands of Christians in Lebanon we can find 1,000 competent presidents but the current political gangs wants you to believe otherwise. What happened to Ziad Baroud? Isn't he a good option for both M8 and M14?

Why did you ignore the other war mongers ...... Berri plays with the best of them, Nasrallah has so many Jihadists waiting for his command, Jumblat weazling his way in every way possible except in ways that benefit LEBANON, and of course the Takfiri ones.
Lebanon has no shortage of warlords, only shortage of Patriotism and good Governance

Same way Berri tries to make it appear as if within the Shiaa there's no one fit to be Speaker except his highness... ma ma32oul addeih Sha3b hibil ni7na...walla ma ma32oul!

The Christians will never unite. Harris knows this. Status quo suits him. Hizbulla getting weaker by the day in Syria. So the longer he waits the stronger the hand of M14

Agree? They can't even agree that da3esh are terrorists when the idiot bou la2a, Dr. Arreet 7akeh, calls them revolutionaries (like him) while the entire world (sane, not Sanni or Christian Sanni world) already knows that they are terrorists.