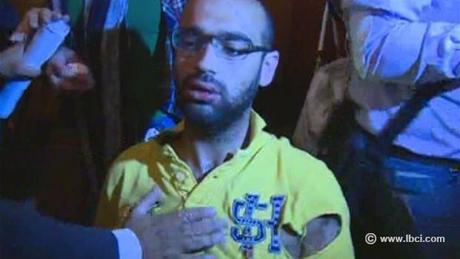 Several reporters and cameramen were wounded after a verbal spat occurred between a cameraman and security forces in Dar al-Fatwa.

According to the state-run National News Agency, journalists were allowed to enter the hall were a new Mufti was being elected but a quarrel took place with security forces.

Several reporters who were attacked said that they will press charges to the General Prosecution.

The Internal Security Forces said an investigation was launched into the matter upon the orders of Interior Minister Nouhad al-Mashnouq and the agency's chief.

Prime Minister Tammam Salam expressed regret over the incident and tasked Mashnouq with following up the matter.

Dar al-Fatwa's press office rejected any attack on journalists and described the media as “Lebanon's nerve.”

LBCI said that a confusion happened on whether reporters and cameramen were allowed to enter the hall where newly-elected Mufti Abdul Latif Daryan was giving a speech.

Guards in civilian clothes were seen pushing journalists and assaulting them after a verbal spat.

Cameramen taking photographs of guards attacking their colleagues were also beaten up.

Journalists later held a sit-in near Dar al-Fatwa to condemn the attack against their colleague.

True true, next time they should wait till theh have a manifestation outdoors, then ask HA men of God to assasinate him in broad daylight in front of lebanese armed forces
Ya heik l democracy ya bala

Sorry terrorist, but we hsould never adopt their behaviour no matter what, bc that would make us like them. And now we get the blame and ntv will milk it, so lose lose
The win is hving all sunnis united in beit al wasat while saad delivered his speech, string message ror those who bet on dividing the sunni house just like they did with christians

does he look like a journalist or a member of a terrorist militia?

Southerner, you teeth so YELLOW, the traffic slows down when you smile.
What's a YELLOW T-shirt hizbCocaine supporter doing at Dar al-Fatwa?
Maybe attempted assassination?

lol@tony! It is the portuguese auto-correct function that he keeps on his keyboard. He uses 6 different languages when he writes on naharnet;)