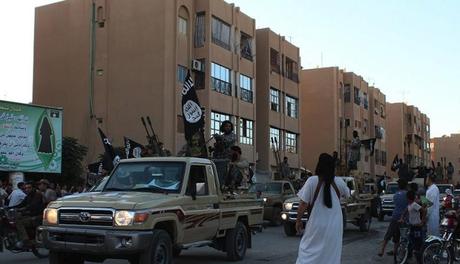 Syrian regime air raids killed 12 people on Sunday and wounded 23, including a mother and a baby boy removed from her womb, according to a monitoring group and amateur video.

The video, broadcast by militants in the city of Raqa in northeastern Syria and whose authenticity could not be verified, shows a frail infant being resuscitated with a respiratory mask on his face and blood-soaked cotton by his side.

His little chest is seen responding to treatment as his bloodstained head is wrapped in gauze.

"This baby's mother was wounded in the belly, and we had to remove him. He was hit in the head by shrapnel, and the doctors are trying to save him," said a commentary on the video footage.

The Syrian Observatory for Human Rights monitoring group also reported that the infant had been removed from his mother's womb, and said both mother and child survived the ordeal.

It said 12 people -- including five children, a woman and a teacher -- were killed when regime warplanes bombarded parts of Raqa city which is held by Islamic State jihadist fighters.

Since the IS launched a lightning offensive in neighboring Iraq two months ago, regime forces have been pounding positions of the jihadists who also control territory in eastern and northern Syria.

The group, which declared a "caliphate" straddling the two countries at the end of June, is seeking to extend the territory it controls.

IS fighters have spread terror in its strongholds such as Raqa, where it imposes its own extreme interpretation of Islam, and arrests people, beheading some and stoning others.

In the eastern province of Deir Ezzor, most of which it controls, the IS has seized three villages from the influential local Shuwaitat tribe.

Two weeks of fighting between the jihadists and tribesmen is reported to have killed dozens of people and led to an exodus of more than 5,000 civilians.

The more than three-year conflict in Syria, which the Observatory says has killed more than 170,000 people, has become even more complex with the rise of jihadist groups battling both government forces and mainstream rebels.

Poor Syrians - caught between the monstrocity of a criminal regime and a pschopatic caliphate.