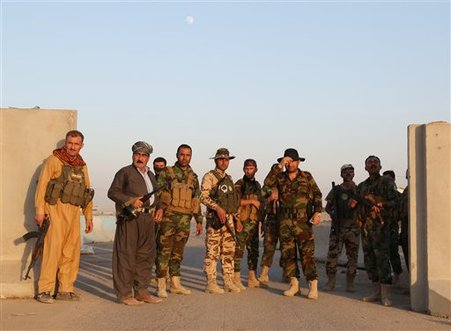 The third straight day of strikes by U.S. jets and drones brought the first sign that U.S. President Barack Obama's decision to return to Iraq could turn the tide on two months of jihadist expansion.

Another official confirmed the Kurdish troops had recaptured the towns, which Islamic State (IS) militants had seized days earlier, bringing them within striking distance of Kurdish capital Arbil.

The US air strikes which Obama announced on Thursday stopped the rot just as the militants moved close enough to the autonomous Kurdish region to cause a panic in Arbil, where some U.S. personnel are stationed.

IS attacks have displaced 200,000 people since August 3, including all the residents of Iraq's largest Christian town Qaraqosh.

Among the others affected were a large contingent of Iraq's small Yazidi minority, whose main hub Sinjar was attacked last weekend.

According to leaders and witnesses, several dozen men were executed and groups of women abducted, although reliable information from IS-held areas is scarce.

When the militants entered Sinjar, tens of thousands of people ran up the nearby mountain to hide.

Thousands were still there a week later, trying to survive in searing heat with little food or water.

The siege of Mount Sinjar, which local legend holds as the final resting place of Noah's Ark, as and a poignant appeal by Yazidi MP Vian Dakhil to save her community from extermination have captured the West's attention.

Obama justified his decision to send warplanes back over Iraqi skies three years after the last troops pulled out partly because of the risk of an impending genocide.

The U.S. intervention appeared to yield early results on that front too as officials said around 20,000 people had escaped the siege and been escorted to safety by Kurdish troops since Saturday.

Foreign aid groups operating in the region confirmed several thousand survivors of the Mount Sinjar siege had transited through Syria and crossed back into Iraq, many of them traumatised and dehydrated.

U.S. and Iraqi cargo planes have been air dropping food and water over Mount Sinjar, a barren 60-kilometer (35-mile) ridge.

Britain joined the effort overnight Saturday with its first air drop of food and water.

At pains to assure war-weary Americans he was not being dragged into a new Iraqi quagmire, Obama put the onus on Iraqi politicians to form an inclusive government and turn the tide on jihadist expansion which has brought Iraq closer than ever to breakup.

His comments were yet another nudge for Prime Minister Nuri al-Maliki to step aside and allow for a consensus government by abandoning what looks like an increasingly desperate bid to seek a third term.

"In this time, Iraq particularly needs a broad-based unity government because all Iraqis need to feel represented to wage the fight against terrorism together," he said.

The cash-strapped autonomous Kurdish region's peshmerga force has also struggled, and turning Sunni Arabs against the jihadists is seen as the key to rolling back two months of losses.

However, there was no sense of urgency emanating from parliament Sunday as MPs who have to agree on a nomination for prime minister discussed other issues and slated the next session for August 19.

Maliki, who is commander in chief of the armed forces, has not spoken publicly about the U.S. intervention, and the U.S. strikes since Friday are barely reported on Iraqi state television.

Obama did not give a timetable for the U.S. military intervention but said Saturday that Iraq's problems would not be solved in weeks. "This is going to be a long-term project," he said.

A saying by the Prophet Muhammad: "Who saves a life, saves all of humanity."
...........
Someone needs to recite that saying to the ISIS criminals. They have distorted Islam to the point of no recognition. Moderate Islam needs to rise against those thugs.

Give the Kurds the modern weapons and they'll do the job that the western powers are frightened to do.