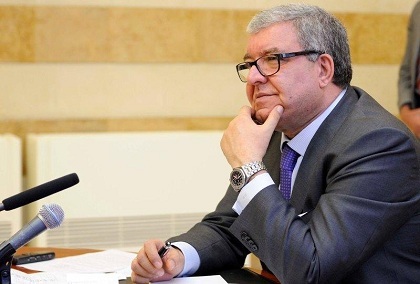 Interior Minister Nouhad al-Mashnouq said on Monday that the latest Saudi grant made to boost the performance of security apparatuses in Lebanon will be deposited in the Central Bank after the cabinet approves it.

“We are currently drafting a formula to approve the grant based on the highest degrees of transparency,” Mashnouq said in comments published in An Nahar newspaper.

He pointed out that Prime Minister Tammam Salam could discuss the grant from outside the government's agenda during the upcoming cabinet session.

His trip follows his announcement that Saudi Arabia, one of his chief allies, would give $1 billion to shore up the army and security forces against jihadists.

Asked about the status of the Syrian refugees in Lebanon, Mashnouq said that they are divided into four categories: Those who are sentenced in their country and will not be deported, the ones who have in their possession legal identification papers, those who entered Lebanon illegally but the Lebanese General Security is legalizing their conditions and the ones who don't have any identification papers.

However, he noted the the Syrian regime refuses to welcome back any refugees no matter what their legal status was.

On Saturday, Syria's ambassador to Lebanon Ali Abdul Karim Ali announced that the situation of Syrian refugees returning home has been solved after hundreds of them have been stranded in border areas in the past days following the clashes between army troops and jihadist militants in the northeastern border town of Arsal.

At least 47,000 Syrian refugees have taken shelter in Arsal, a town where many residents sympathize with the Syrian uprising against President Bashar Assad.

Hosting more than 1.2 million Syrians fleeing their country's three-year war, Lebanon is home to the highest number of Syrian refugees in the region, and also to the highest refugee population per capita in the world.

However, he noted the the Syrian regime refuses to welcome back any refugees no matter what their legal status was.

Now watch a civil war break out cause of money.

Hariri came back to Lebanon as he saw the CASH...these people are only interested by the money. Tel pere, tel fils

dear george or maybe should i say dear jaafar, if they were interested by money, i think they would stay in GCC, innit ?

Merci pour votre vision et votre fine analyse Georges! Are you sure Saad Hariri is only interested in money? If he was, he would have sat back, relaxed and enjoyed his fathers fortune that could have lasted for generations. I do not think he chose the easy way, or the the most profitable one. He sure made mistakes and will do more... but "interested in money"... I am not sure this is what best qualifies him...

Sir, the Hariri's always lived for money. His father died for money (remember the SALSA law that General Aoun defended in front of the US Congress that calls for freezing the money of people who have Syrian links / being pro-Syrians)
Solidere is the biggest thievery operation that ever happened. They dont respect laws or consitution as long as they can make cash.
Hariri is as corrupted as his father

"Proves, articles, movies, or whatever to prove your point?
Otherwise it is a diffamation"

Sorry for the mistakes, my Portuguese auto-correct is on.

For sure, everybody knows Hariri - father, son, sister, aunt, grandson,...are philantropists. We all know it's a family tradition :-)

thepatriot...what to say about your 'analysis' ? it's not even worth your mask (...très original en plus)

don't worry Flamethrower, jerry has never...never invited people to his house. He doesn't know what a Guest is !!!

so u visited the FED reserve ?

"Proves, articles, movies, or whatever to prove your point?
Otherwise it is a diffamation"

Sorry for the mistakes, my Portuguese auto-correct is on.

Hm.Question is how much of this money will reach the military. It has to bee shared between futyre, Amal, Hezbollah, tayyar, Owet, Jumblat etc etc.

The leftovers will be enough to buy new ammo maybe...