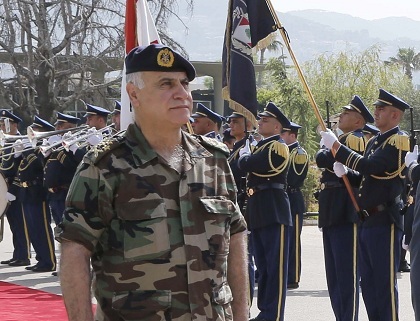 Army Commander General Jean Qahwaji stressed on Monday that the military institution “saved Lebanon from a deadly sectarian rift,” revealing that the Islamist gunmen in the northeastern town of Arsal were preparing for a “tragedy.”

“The battle of Arsal proved that our army is strong and its morale is high as it cut the road on a scheme to change Lebanon and maybe erase it from the world map,” Qahwaji said in an interview with As Safir newspaper.

He revealed that he informed Prime Minister Tammam Salam that if gunmen defeated the army in Arsal, then a Sunni-Shiite sedition would have ignited Lebanon.

“Gunmen would have reached al-Labweh and committed massacres in it and would have taken control of a swath of territory and reached the sea thus announcing a new state in Lebanon,” Qahwaji said, describing the scenario as a “disaster.”

Al-Labweh and al-Nabi Othman are Shiite towns in north Lebanon whose residents are supporters of Hizbullah, which is fighting alongside troops loyal to President Bashar Assad against the majority Sunni rebels.

Qahwaji considered that the army emerged victorious from the Arsal clashes, noting that it “averted a dangerous scheme planned against Lebanon.”

“Our priority is to return the missing soldiers safely no matter what price we pay... This matter will not be postponed,” the army chief vowed, adding that “they were taken to caves on the outskirts of Arsal, which are difficult to reach.”

The fighting in Arsal broke out on August 2 when jihadists from Syria attacked army and police posts in Arsal after the arrest of a militant accused of belonging to Syrian al-Qaida affiliate Al-Nusra Front.

The Lebanese army began deploying into Arsal on Friday, after a group of Sunni clerics negotiated a truce that saw jihadists withdraw.

Qahwaji denied that the arrest of top militant Imad Ahmed Jomaa in Arsal triggered the attack by militiamen, considering it a “premeditated operation to control the army posts” in the area.

He noted that the suspect told investigators that he was “putting the final touches” to determine the roads that the gunmen must take to control the district of Akkar, including the Shiite towns.

Qahwaji denied that an agreement was held with gunmen to ensure their withdrawal from Arsal.

The seizure of Arsal marked the first time that Islamic extremists from Syria carried out a large-scale incursion into Lebanon and raised fears of a further spillover of the conflict across the porous border.

Qahwaji revealed that he warned the political powers via a memorandum in Lebanon in 2011, when the Syrian conflict began, of the repercussions of the developments in the neighboring country.

“I proposed the formation of an emergency cell to confront the impact of the developments in Syria,” he pointed out.

The high-ranking military official told As Safir that the memorandum was followed by two others in 2012, saying: “During the Higher Defense Council meetings I presented a detailed explanation for the situation in Syria and the risks posed on Lebanon, especially along our border.”

Qahwaji remarked that the “danger is not over as long as the crisis in Syria is ongoing and terrorists are scattered in the outskirts.”

All respect and congratulations for "averting deadly sectarian strife", question remains for the government authorities : how to avoid and eliminate once for ever the existence of the potential sectarian virus?

I question the prioritizing of prioritization as a priority at this time. I am a Shiite. My sect is the majority in Lebanon. My vote at the polls is worth roughly one half the vote of a Christian.
Can you help me?

CHRISTSHLAU? Shiass as important as they are, are not more than christians who count more than sunni or shi3a combined, just because many left to find work or refuge outside, you claimed victoty. SUNNI, on the other hand have shawn to be closer to christians since yhey contributed tp the government and not like the iranian militias.

Great job of the army, these terrorists really want to divide Lebanon. They have a nefarious plan to gather in Lebanon his evil reign chasing Christians. Are Sunni fanatics

Congratulations army. There is no denying that this was the intention of Syrian rebels... Let me assure every warmonger who wishes the likes of Nusra and ISIS to rule over Lebanon:

1)One this will never happen

2) If it did happen - this is food for thought - you'd wish it never did. The likes of the Assad regime's boots on your heads will feel like butterflies in the garden in comparison.

Long live a free and prosperous Lebanon - for every person in every region, free from sectarianism... and good job to all of you who see thru the sectarian speech on the comments of this site.

Naharnet, I will keep telling you, you disgrace the name of An Nahar and it's founders by continuing to let such garbage in the comments.