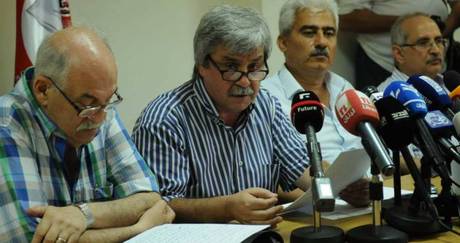 The Syndicate Coordination Committee announced on Monday that it will continue its boycott of correcting the official exams until the approval of the new wage scale.

Politicians have meanwhile been demanding that teachers correct exams in order to avoid granting students certificates, indicating that they have passed their academic year, as a substitute to the exams.

Education Minister Elias Bou Saab called on the committees tasked with correcting exams to do so on Tuesday.

"We'll hand certificates to students if they fail to comply," he said after meeting with an SCC delegation on Monday afternoon.

Earlier, head of the SCC Hanna Gharib declared during a press conference that the committee rejects the idea of certificates, demanding political blocs to “sympathize with the teachers and students” and approve the new wage.

He demanded that officials “halt their stalling,” while rejecting claims of divisions within the SCC.

“The new school year will not begin before the approval of the new wage scale,” added the committee.

It then announced that it will go ahead with the boycott, saying it will hold a sit-in in front of the Education Ministry on Tuesday morning and a general strike on Wednesday

It will also hold a rally in front of the Grand Serail in Beirut.

"Those who heed the minister's call to meet on Tuesday will be held accountable for their actions," it added.

Teachers representing the AMAL, Free Patriotic, and Mustaqbal Movements had urged on Sunday the SCC to correct official exams.

Education Minister Elias Bou Saab announced on Friday that he is going forward with issuing passing statements for Grade 12 and Grade 9 school students who have applied for official exams, calling on teachers and the SCC to end their boycott.

Parliamentary blocs have continuously expressed their support for the employees' rights, but have warned that Lebanon's ailing economy would suffer if the total funding was not reduced from LL2.8 trillion ($1.9 billion) to LL1.8 trillion ($1.2 billion).

The Russian revolution began with a bread riot.